John Piper in Belfast - Beware of his false teaching on Justification by Faith Alone! 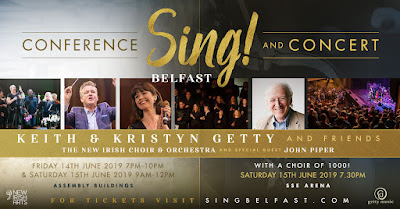 This coming Friday & Saturday, 14th & 15th June 2019, there is a Conference and Concert taking place at Assembly Buildings, Belfast. It seems to be sponsored by 'New Irish Arts' and 'Getty Music'.

The Special Guest announced for this event is John Piper. According to his own bio on his website John Piper is founder and teacher of desiringGod.org and chancellor of Bethlehem College & Seminary. For 33 years, he served as pastor of Bethlehem Baptist Church, Minneapolis, Minnesota. He is author of more than 50 books, including Desiring God: Meditations of a Christian Hedonist and most recently Why I Love the Apostle Paul: 30 Reasons.

John Piper is also known for Scriptural and doctrinal views that anyone who loves the truth of the Bible should be concerned about, especially the great Reformation doctrine of Justification by Faith Alone.

1. John Piper believes in a mangled version of the Gap Theory. He believes in a version of creationism known as "Historical Creationism". He references a book by John Sailhamer entitled 'Genesis Unbound' to explain his view.

"Historical creationism" believes that God created the universe, planet Earth, and many creatures and things within Earth itself over the course of an indefinite time period before the first day of the week of Genesis 1, and that the days of the creation week were God changing a desolate piece of land into the blessed region of Eden, where God would bring Adam and Eve into existence and place them within it on the sixth day.

Piper teaches that man had his beginning not millions of years ago but within the scope of the biblical genealogies. Those genealogies are tight at about 6,000 years and loose at maybe 10 or 15,000. So I think we should honour those genealogies and not say that you can play fast and loose with the origin of man.

However he also believes that the earth can be billions of years old. Referring to Genesis 1:1 John Piper says: "In the beginning he made the heavens and the earth," he makes everything. And then you go day by day and he's preparing the land. He's not bringing new things into existence; he's preparing the land and causing things to grow and separating out water and earth. And then, when it's all set and prepared, he creates and puts man there.

So that has the advantage of saying that the earth is billions of years old if it wants to be—whatever science says it is, it is—but man is young, and he was good and he sinned. He was a real historical person, because Romans 5 says so, and so does the rest of the Bible.

2. John Piper believes in a mangled version of the Continuation of Charismatic Gifts. He believes that the supernatural gifts such as prophecy, miracles, healings, and speaking in tongues have not ceased and should be sought by the church. They should be sought in particular with regard to missions and evangelism.

He nuances what he believes by saying that the office of Apostle has ceased; that the gift of prophecy in the church is not the same as the inspiration of the inspired Scriptures; that while God's supernatural revelation in the New Testament gift of prophecy is without error the prophet's perception, understanding and delivery of that revelation is imperfect and fallible, thus modern prophecies within the church should be sifted.

In essence he seeks to have the best of both worlds. He believes in the continuation of the gifts but qualifies his acceptance of this belief by mixing in a little doubt about the trustworthiness of the use of the gift.

John Piper's teaching on this vital doctrine is suspect at best and full of grievous error at worse.

John Piper believes in and teaches what is called 'Final Salvation'. This gravely and seriously impinges upon the doctrine of Justification by Faith Alone.

This statement undermines the righteousness of Christ imputed to believers and every legal status the believer has in relation to God. It teaches that something more than imputed righteousness is needed to be the evidence that we are justified.

Quotes from John Piper's article entitled 'Does God Really Save Us by Faith Alone?' and related articles: [Emphasis mine]
"In final salvation at the last judgment, faith is confirmed by the sanctifying fruit it has borne, and we are saved through that fruit and that faith."

"These works of faith, and this obedience of faith, these fruits of the Spirit that come by faith, are necessary for our final salvation. No holiness, no heaven (Hebrews 12:14). So, we should not speak of getting to heaven by faith alone in the same way we are justified by faith alone."

"Essential to the Christian life and necessary for final salvation is the killing of sin (Romans 8:13) and the pursuit of holiness (Hebrews 12:14)."

Such faith always “works by love” and produces the “obedience of faith.” And that obedience— imperfect as it is till the day we die—is not the “basis of justification, but . . . a necessary evidence and fruit of justification.” In this sense, love and obedience—inherent righteousness—is “required of believers, but not for justification”—that is, required for heaven, not for entering a right-standing with God."

These statements are more akin to Rome's version of justification by faith than the Biblical, Reformed view of the subject. Rome teaches that a person needs imputed righteousness and inherent righteousness for salvation. John Piper is doing exactly the same. His version of 'final salvation' is similar to that defined by the Council of Trent:
CANON 9. If any one saith, that by faith alone the impious is justified; in such wise as to mean, that nothing else is required to co-operate in order to the obtaining the grace of Justification, and that it is not in any way necessary, that he be prepared and disposed by the movement of his own will; let him be anathema.

CANON 11. If any one saith, that men are justified, either by the sole imputation of the justice of Christ, or by the sole remission of sins, to the exclusion of the grace and the charity which is poured forth in their hearts by the Holy Ghost, and is inherent in them; or even that the grace, whereby we are justified, is only the favour of God; let him be anathema.

CANON 32. If any one saith, that the good works of one that is justified are in such manner the gifts of God, as that they are not also the good merits of him that is justified; or, that the said justified, by the good works which he performs through the grace of God and the merit of Jesus Christ, whose living member he is, does not truly merit increase of grace, eternal life, and the attainment of that eternal life,--if so be, however, that he depart in grace,--and also an increase of glory; let him be anathema.

For these reasons it is best to avoid John Piper and his teaching.
Posted by Rev Brian McClung at Thursday, June 13, 2019