Themes from the Book of the Revelation

Sermon One - Why study prophecy?

Degrees of reward in Heaven

The American Puritan Jonathan Edwards in a sermon on the reward of the righteous based upon Romans 2:10: But glory, honour, and peace, to every man that worketh good, to the Jew first, and also to the Gentile, discourses upon the degrees of reward in heaven. This is what he had to say:

There are different degrees of happiness and glory in heaven. As there are degrees among the angels, viz. thrones, dominions, principalities, and powers; so there are degrees among the saints. In heaven are many mansions, and of different degrees of dignity. The glory of the saints above will be in some proportion to their eminency in holiness and good works here. Christ will reward all according to their works. He that gained ten pounds was made ruler over ten cities, and he that gained five pounds over five cities. Luke 19:17. 2 Corinthians 9:6. “He that soweth sparingly, shall reap sparingly; and he that soweth bountifully shall reap also bountifully.” And the apostle Paul tells us that, as one star differs from another star in glory, so also it shall be in the resurrection of the dead. 1 Corinthians 15:41.
Read more »
Posted by Rev Brian McClung at Monday, November 26, 2012 2 comments: 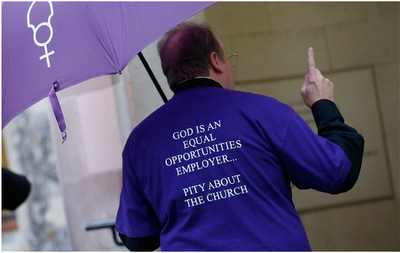 You would wonder where he got this impression from!

In case he doesn't know this is what God has to say on the matter:

Imagine the outcry if this had been Israelis on the moterbikes!

Can you imagine the frenzied outcry of the appeasers of Arab terrorism if this had been the other way around and Israel had dealt with calibrators in this fashion. 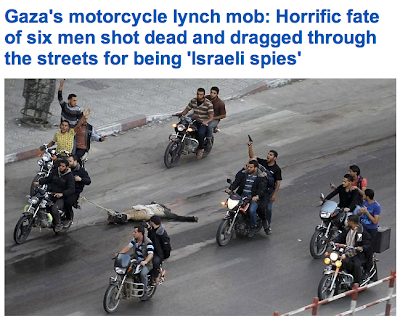 Posted by Rev Brian McClung at Wednesday, November 21, 2012 No comments:

Is an Abortion ever right?

Much comment has been expended on the issue of whether the life of a pregnant woman living in the Republic of Ireland might have been saved if she had been given an abortion. The 31-year-old died after a miscarriage at Galway University Hospital on 28th October. Her family claimed she was repeatedly refused a termination during the miscarriage.

Over a dozen reasons why the argument for Exclusive Psalmody doesn't stand up, Part 11

11. The Puritans did not all believe in Exclusive Psalmody

The impression is often given by those who promote exclusive psalmody that every Reformed stalwart of the past was an exclusive psalmist. This could not be further from the truth. Many of the great and good men of the past who were reformed in doctrine did not hold to the exclusive singing of the Psalter.

Some prominent examples:
1. Matthew Henry. In his commentary on Ephesians 5:19 the renowned and much loved expositor had this to:
By psalms may be meant David's psalms, or such composures as were fitly sung with musical instruments. By hymns may be meant such others as were confined to matter of praise, as those of Zacharias, Simeon, &c.
On Colossians 3:16 his commentary reads:
Singing of psalms is a gospel ordinance - the Psalms of David, and spiritual hymns and odes, collected out of the scripture, and suited to special occasions, instead of their lewd and profane songs in their idolatrous worship.

Seek not to grow in knowledge chiefly for the sake of applause, and to enable you to dispute with others; but seek it for the benefit of your souls, Jonathan Edwards [Puritan].
Posted by Rev Brian McClung at Monday, November 19, 2012 No comments:

The fifth pillar of the Protestant Reformation was Sola Deo Gloria - to the glory of God alone.

All of these pillars were defined and articulated by the Reformers in opposition to the errors of Romanism. This fifth pillar likewise stands in contradistinction to the teaching of the Roman Catholic Church.

In a sign of things to come the Charity Commission in England and Wales has refused to register the Preston Down Trust of the Plymouth Brethren as a charity because of their restrictions upon who can take Communion at their services. The Plymouth Brethren operate a 'closed communion' practice where only members can sit at the Lord's Table. It also said that the Trust does not do enough good works in the community.

The right of churches to decide for themselves who may partake of Communion is now being challenged by the Charity Commission in England and Wales. This will have a huge impact on the Brethren's ability to claim back Gift Aid on donations. 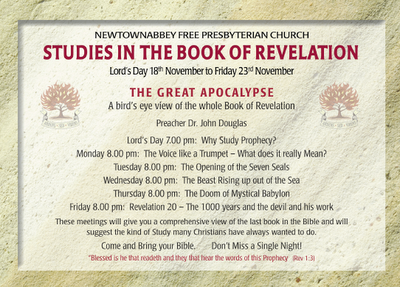 Posted by Rev Brian McClung at Friday, November 16, 2012 No comments:

Mr Adrain Smith made the comments on his personal Facebook page, outside of work hours, and which were not visible to the general public. He said that sodomite weddings in churches were "an equality too far".

Mr Smith's employer, Trafford Housing Trust, near Manchester, took disciplnary action against him for bringing the Trust into disrepute, alleging that his comments amounted to "gross misconduct".

No lie is of the truth! [Sodomite marriage]

It transpires that David Cameron, British Prime Minister, has been seeking to bolster his party's support for Sodomite marriage by arguing that it a vote winner. The only problem is that he has been found out to be lying. To support his argument David Cameron was using polling data from a ComRes poll carried out on the subject.

However instead of bolstering support for the Conservative party, the promotion of Sodomite marriage will in fact lose votes. Mr Andrew Hawkins from ComRes has written to the Prime Minister pointing out the repeated inaccuracies within his argument.

Click on the above icon to link to the webpage
Posted by Rev Brian McClung at Wednesday, November 14, 2012 No comments:

Those who are ashamed, or afraid, to acknowledge Christ before men, cannot expect to be saved. The want of courage to confess, is decisive evidence of the want of heart to believe.

Charles Hodge in his commentary on Romans.

Posted by Rev Brian McClung at Monday, November 12, 2012 No comments:

Pillars of the Reformation - 4. Sola Fide

The fourth pillar of the Protestant Reformation was 'Sola Fide' - by faith alone.

According to Martin Luther, justification by faith alone is the article on which any church stands or falls. In order for a sinner to be declared to be righteous before God the sinner needs the merit of Christ reckoned to their account. This fourth pillar deals with how this is done. How does the righteousness of Christ be reckoned to a sinner’s account, thus removing their guilt and condemnation and declaring them to be righteous before a holy God?

The Reformers at the time of the Reformation went back to primitive New Testament Christianity and said that this is done solely by faith alone, without any works on the part of the sinner who is being declared righteous.

Pillars of the Reformation - 3. Sola Christo

This third pillar of the Protestant Reformation emphasies the meritorious basis upon which God’s grace flows toward an undeserving sinner. The favour of God has to be purchased. The Reformers in holding this position sought to remove the claim of anything and anyone other than Christ as being the meritorious cause of salvation.


I. It is through Christ alone that salvation is purchased for the sinner.
There is one mediator between God and men, the man Christ Jesus, 1 Timothy 2:5. As John Calvin said in the Institutes of the Christian Religion said: Christ stepped in, took the punishment upon himself and bore the judgment due to sinners. With his own blood he expiated the sins which made them enemies of God and thereby satisfied him...we look to Christ alone for divine favour and fatherly love!

Pillars of the Reformation - 2. Sola Gratia

The second pillar of the Protestant Reformation was 'Sola Gratia' - By Grace Alone. This pillar emphasies the origin of God’s redemptive plan and purpose. On what basis did God purpose to redeem sinners and save them from eternal wrath?  He did so freely by His sovereign grace. Nothing else and no one else moved God to redeem guilty, undeserving sinners. Grace has often been described as God's unmerited favour or taking the five letters of the word 'grace' - Great Riches At Christ’s Expense.

Over a dozen reasons why the argument for Exclusive Psalmody doesn't stand up, Part 10

10. The Reformers at Geneva did not believe or practice Exclusive Psalmody

1. John Calvin in his commentaries did not believe that the term 'Psalms, Hymns and spiritual songs' referred to the Psalter and gave support to exclusive Psalmody. In his commentary on Ephesians 5:19 he says:
What may be the exact difference between psalms and hymns, or between hymns and songs, it is not easy to determine, though a few remarks on this subject shall be offered on a future occasion.

Posted by Rev Brian McClung at Sunday, November 04, 2012 No comments: