How many more are dead thanks to Chesney & this cover up?

The summary of the report on the Claudy bombing makes damning reading:
6.5 Extensive police Intelligence received after the bombings details allegations that Father Chesney was involved in acts of terrorism, including the bombing of Claudy. It also connects him to terrorist activities with Man A, who left the jurisdiction after being arrested and interviewed by police. The Intelligence further identifies Father Chesney as the IRA’s Director of Operations for the South Derry Area.
6.6 This compelling Intelligence picture should have led police to pursue further investigative opportunities in respect of Father Chesney, which might have either implicated him in or eliminated him from the enquiry. Certainly police officers involved in the investigation wished to pursue these enquiries but such decisions were deferred to a senior RUC Officer.
6.7 The Police Ombudsman’s investigation has found that a senior RUC Officer corresponded with the NIO, requesting that the Government raise with the Catholic Church their grave concerns in relation to Father Chesney.
6.8 This documentary evidence and historical records supplied by the Catholic Church reveal that the Secretary of State, Rt. Hon. William Whitelaw, and Cardinal William Conway, met on 5 December 1972. The evidence indicates that at the end of the meeting a private discussion, initiated by the Secretary of State, took place between both men, during which the Father Chesney issue was discussed.
6.9 The following day the NIO wrote to police stating that the Cardinal would ‘see what could be done’ and had ‘mentioned the possibility of transferring him to Donegal’.
6.10 This correspondence was shared with and accepted by the then Chief Constable of the RUC, Sir Graham Shillington, who on 11 December 1972, recorded the note; ‘Seen. I would prefer transfer to Tipperary’. Other senior RUC officers also had sight of the correspondence.
6.11 From information made available to the Police Ombudsman’s investigation by the Catholic Church it is evident that Cardinal Conway again met with the Secretary of State on 4 February 1973. During this meeting the Cardinal informed the Secretary of State, Rt. Hon. William Whitelaw, that the allegations relating to Father Chesney’s activities had been raised with the priest by his ‘Superior’ and ‘a colleague’ but that he had denied any involvement. Cardinal Conway records that the ‘Superior’ had told Father Chesney to remain where he was convalescing following an illness. The Police Ombudsman’s investigation believes that Father Chesney was in County Donegal at this time.
6.12 Father Chesney was eventually appointed to a parish in Donegal in late 1973. He was never again appointed to a parish in Northern Ireland. He is known to have regularly travelled across the border but was never arrested, questioned nor further investigated by the RUC in connection with the Claudy bombings or other terrorist activity. Father Chesney died in 1980.
The unanswered and unanswerable question is: how many other innocent people lost their lives so that a priest might be protected? Thankfully there is a higher court where none will escape answering for their crimes.
Another question is this: Is it not simply impossible for Martin McGuinness who was in the higher ranks of the IRA not to have known about the activities of Chesney? I think not!
Maybe McGuinness' new found political associates and partners in government could ask him that question!
The words of condemnation ring a little hollow when they come from people who now prop up this wicked government with the IRA at its heart. You can't really condemn the atrocities committed over the years of the troubles while sitting in government with the perpetrators of those same wicked acts.

A house divided against itself can not stand, Matt 12:25.
Posted by Rev Brian McClung at Wednesday, August 25, 2010 No comments:

If the report in today's Newsletter is accurate then open-airs and other public meetings and protests will be exempt from the new legislation.
The reports states that there were 410 responses, with many of them arguing against the inclusion of public meetings in this draft legislation.
This is welcome news. Thankfully common sense has prevailed. However, it is worth remembering that this type of restrictive legislation should never have been entertained in the first place.
We highlighted this issue some time ago.
See here: An attack upon our civil & religious liberities
& here - Row flares of Church meetings
Posted by Rev Brian McClung at Thursday, August 12, 2010 No comments:

A few photographs taken at the Free Presbyterian protest against the Gay Pride parade in Belfast last Saturday. 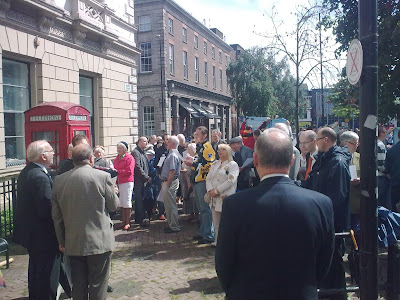 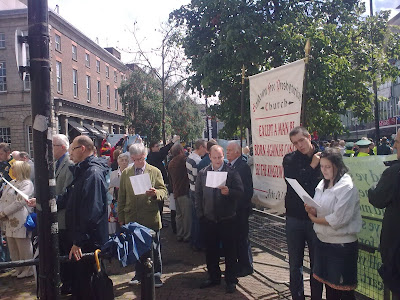 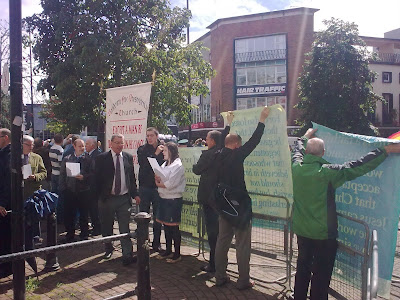