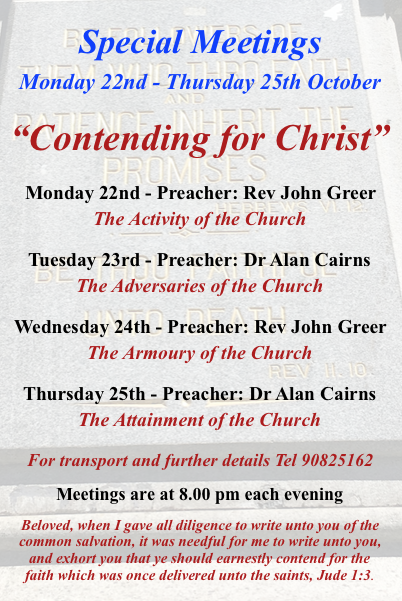 Posted by Rev Brian McClung at Sunday, September 30, 2018 No comments: 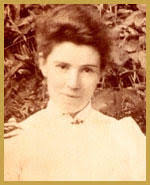 Amy Carmichael was born on 16th December 1867 in Millisle, Co-Down, Northern Ireland. She is best known for her labours in Belfast and also for her missionary endeavours, particularly in Dohnavur, southern India, which included an orphanage.

She served the Lord on various mission fields for 55 years without any furlough time at home. She died, aged 83, on 18th January 1951 in Dohnavur, India, where she had laboured for over 40 of those 55 years.

For the last 20 years, of that missionary service, she was an invalid, confined to her room in the orphanage she was instrumental in seeing built 30 years earlier (1901). It was in 1931 that she suffered what seemed a fairly minor accident. However, this accident ended up crippling her. Confined to her room for those 20 years she was not inactive. From bed of sickness she organised, counselled and wrote numerous books. She wrote between 30 to 40 books during her lifetime.

In a letter published today in the Belfast Newsletter Mr Callum Webster, the Northern Ireland officer for the Christian Institute, has outlined the fallout for those who disagree with the new transgender procedures recently adopted by the Girl Guides association. Those who disagree have been sacked!

This display of liberal intolerance is no surprise. Everyone must show tolerance towards all the perversions of the day and make accommodations for them. But when a Christian or someone else objects to these sinful practices then the real spirit among the socially liberal is displayed. It is a spirit of intolerance.

Helen Watts is one of the expelled volunteers. Her story was featured on the BBC News website recently - Girlguiding says girls not at risk from trans inclusion

In his letter Mr Webster responds to the claims of the Girl Guides leaders.

The lesson for girl guides? Shut up about transgender concerns
Last year Girlguiding UK opted to let men can join as leaders – if they feel they have been born in the ‘wrong’ body. Likewise, boys who say they are girls could use female toilets, changing rooms, tents and showers. If this were not enough, in both instances the organisation advised leaders not to tell parents if their daughters would be affected.
Read more »
Posted by Rev Brian McClung at Friday, September 28, 2018 No comments: 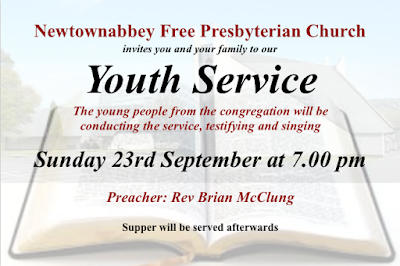 The third church history anniversary commemorated was that of William Chalmers Burns. This year, 2018, marks the 150th anniversary of his death.

'Willie' Burns was saved from a careless life as a youth and devoted himself to the service of the Lord. He wrote: From the first moment of this wonderful experience [ie. his conversion] I had the inspiring hope of being saved by a sovereign and infinitely gracious God; and in the same instant almost, I felt that I must leave my present occupation and devote myself to Jesus in the ministry of the glorious gospel by which I had been saved.

He endured much in the land of China for the sake of his Lord and Master. The story is told how that on one occasion he was arrested and told to bow before the chief magistrate. His response was: Your Excellency, I will render to you the same obeisance as I would to my Sovereign Queen Victoria, humbly on a bended knee, but I will only kneel on both knees to God, the King of Kings. 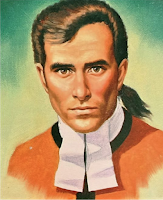 The second church history anniversary commemorated was that of David Brainerd. This year, 2018, marks the 300th anniversary of his birth.

David Brainerd was the missionary who took the Gospel to the Native Americans. He wrote in his diary: Here am I, Lord, send me. Send me to the ends of the earth. Send me to the rough, the savage pagans of the wilderness. Send from all that is called comfort in earth or earthly comfort. Send even to death itself if it is be in Thy service and to promote Thy kingdom. I care not where I go, or how I live, or what I endure so that I may save souls. When I sleep I dream of them; when I awake they are first in my thoughts.

It was his love for Jesus Christ that constrained him to labour as he did. Again he wrote: If I had a thousand lives, my soul should gladly have laid them all down at once to have been with Christ.

Church History Anniversaries - 400th Anniversary of the Synod of Dort 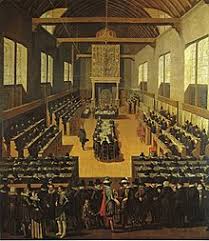 Every August, as the Lord leads, relevant church history anniversaries are commemorated. It is important to remember the mercies of the Lord towards past generations. Events which took place that advanced the caused of Jesus Christ are worthy of remembrance. The raising up men and women of God who served the Lord with distinction is again something that ought to interest every child of God. We can say with the Psalmist: The lines are fallen unto me in pleasant places; yea, I have a goodly heritage, Psalm 16:6.

Here is the consideration of the first of those anniversaries to be marked - 400th anniversary of the commencement of the Synod of Dort. One historian said of the Synod of Dort: The convocation and proceedings of the Synod of Dordt may be considered among the most interesting events of the seventeenth century. The Westminster Assembly was indeed more immediately interesting to British and American Presbyterians, yet the Synod of Dordt had a species of importance peculiar to itself and altogether pre-eminent. It was not merely a meeting of select divines of a single nation, but a convention of the Calvinistic world, to bear testimony against a rising and obtrusive error; to settle a question in which all the Reformed churches of Europe had an immediate and deep interest.