The Christian Institute is reporting a significant victory obtained in the supreme court today.

They report:
I am pleased to give you some good news about an issue supported by our Legal Defence Fund. Following an important ruling in the Court of Appeal, volunteer Sunday school teachers, church elders, deacons, prayer group leaders and all other church volunteers have been saved from an avalanche of equality diktats. The Christian Institute intervened in the case and urged the Court of Appeal not to treat volunteers as though they had the same rights as employees under a European Equal Treatment Directive.
Read more here
Posted by Rev Brian McClung at Thursday, January 27, 2011 No comments:

Now some people are more equal than others:
Despair of Christian hotel owners penalised
for turning away gays
The Daily Mail reports on Peter & Hazelmary Bull losing their court case.

The Christian Institute has a number of reports:
1. Judge rules against Christians but allows appeal
2. Christian owner reacts to court ruling
Posted by Rev Brian McClung at Wednesday, January 19, 2011 1 comment:

Since May 2009 Blogger has added a new feature that provides stats for each blog.

Here is an update on locations from which this blog is accessed since then. 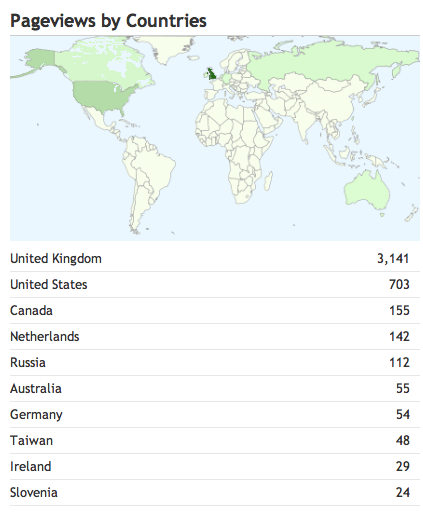 Dancing in the Bible

There is a form of dancing that is Scriptural and a form of dancing that is sinful.
William Wilson in his Old Testament Words Studies indicates that there are four Hebrew words associated with dancing in the Old Testament:
1. Chagag - 1 Sam 30:16 And when he had brought him down, behold, they were spread abroad upon all the earth, eating and drinking, and dancing, because of all the great spoil that they had taken out of the land of the Philistines, and out of the land of Judah.

Wilson defines this word to mean: moving with various turns and agitations in token of joy.
2. Chowlah - Ex 15:20 And Miriam the prophetess, the sister of Aaron, took a timbrel in her hand; and all the women went out after her with timbrels and with dances.
He defines this word to mean: to turn or to twist, perhaps with music in distinction from that without music.
3. Karar - 2 Sam 6:14-16 And David danced before the LORD with all his might; and David was girded with a linen ephod. So David and all the house of Israel brought up the ark of the LORD with shouting, and with the sound of the trumpet. And as the ark of the LORD came into the city of David, Michal Saul’s daughter looked through a window, and saw king David leaping and dancing before the LORD; and she despised him in her heart.
He defines this word to mean: to move nimbly.
4. Raqad - Job 21:11 They send forth their little ones like a flock, and their children dance.
He defines this word to mean: to leap, to skip. to dance for joy.
W. E. Vine in his expository dictionary of New Testament words indicates that there are two words associated with dancing in the New Testament.
1. Orcheo - Matt 14:6 But when Herod’s birthday was kept, the daughter of Herodias danced before them, and pleased Herod.
Vine defines this word to originally probably to mean: to lift up as of the feet, to leap with regularity of motion.
2. Chorus - Luke 15:25 Now his elder son was in the field: and as he came and drew nigh to the house, he heard musick and dancing.
Vine defines this word to mean: an enclosure for dancing; hence a company of dancers and singers.
1. Scriptural dancing
There is the dancing of Miriam and David, Ex 15:20; 2 Sam 6:14-16.
i. This type of dancing involves a rejoicing before the Lord. It is a jumping for joy. It says David leaped and danced before the Lord.
ii. You never read of men and women dancing in this fashion together in the Bible. In fact the first place where dancing is mentioned in the Bible [Ex 15:20] it emphasises that Miriam led the women out to sing the same song that Moses had led the men in singing a little earlier. This also happened when David was returning from the defeat of Goliath, 1 Sam 18:6. It was single sex jubilation before God.
iii. In one place it is a person dancing on their own, Jud 11:34.
iv. In some places it is the unmarried women who danced, Jud 21:21-23.
This is a long way short of what passes for dancing today among the ungodly.
2. Sinful dancing
This is the dancing of the Israelites at the foot of Mt Sinai when they were worshipping the golden calf, Ex 32:19 And it came to pass, as soon as he came nigh unto the camp, that he saw the calf, and the dancing…. This dancing was accompanied with nakedness, Ex 32:25 and denounced by Moses as sin, Ex 32:21. The Egyptians performed some of their religious rites in this indecent manner and the Israelites were now imitating them.
This is the revelling of the Amalekites as they celebrate the conquest of Ziklag, 1 Sam 30:16 And when he had brought him down, behold, they were spread abroad upon all the earth, eating and drinking, and dancing, because of all the great spoil that they had taken out of the land of the Philistines, and out of the land of Judah.
This is the dancing of Herodias' daughter before Herod that pleased that wicked man and his male companions so well, Mark 6:22 And when the daughter of the said Herodias came in, and danced, and pleased Herod and them that sat with him, the king said unto the damsel, Ask of me whatsoever thou wilt, and I will give it thee.
There are certainly times when God so blesses His people that they leap for joy. However, the dancing that is associated with immodesty, revelry, lust and for entertainment ought to be avoided by the Christian as a manifestation of the pleasure crazes of this world. The Bible exhorts us to flee from the appearance of evil, 1 Thess 5:22.

Pleasure crazes of the world:

1. What is wrong with the Christian attending the cinema or the theatre?
2. Dancing
Posted by Rev Brian McClung at Tuesday, January 18, 2011 9 comments: