Not so well known but nevertheless as important, is Dr Henry Cooke's battle for a thoroughly Christian, Bible based education for the children of Protestants.

Again, as in the battle for Trinitarianism Henry Cooke stepped forward and led from the front. He believed in the righteousness of his cause and would not accept anything less than that which honoured the Lord, His truth and that which would adequately safeguard the spiritual wellbeing of Protestant children.


Dr Henry Cooke’s Contending for a 'Bible based' education system
In 1824 when Henry Cooke was moderator of the Synod Sir Robert Peel instigated the setting up of a Royal Commission on Education, and the subsequent Select Committees of the Lords and Commons to: inquire into the nature and extent of the instruction afforded by the several institutions established for the purposes of education, and to report as to the measures which can be adopted for extending generally to all classes of the people the benefits of education. 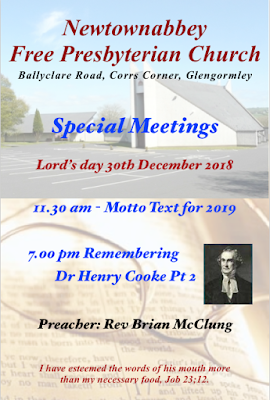 Posted by Rev Brian McClung at Thursday, December 27, 2018 No comments:

Posted by Rev Brian McClung at Wednesday, December 26, 2018 No comments:

Remembering Dr Henry Cooke, Part one - His Battle for Trinitarianism against Arianism

The day following the death of Dr Henry Cooke the Belfast Newsletter announced that ‘A Prince of the church had fallen’ and carried an obituary which extended over four and a half columns. Henry Cooke was indeed a 'prince' in the church of Jesus Christ. He unashamedly was a Protestant, a Presbyterian and a Protagonist.

Dr Henry Cooke's greatest battle for truth and righteousness was fought on the issue of the person of Jesus Christ. There can never be a more important issue which relates to the Gospel than the person of Jesus Christ.
Henry Cooke’s Contending for Trinitarianism
Henry Cooke is probably best known for the part he played in ridding the Synod of Ulster of the Arians. As a result of his stand for Trinitarianism the Arians were forced to leave and set up an alternative Synod, known as the 'Remonstance Synod' and latter still known as the Non-Subscribing Presbyterian Church in Ireland. 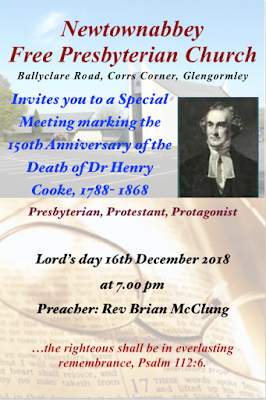 Posted by Rev Brian McClung at Thursday, December 13, 2018 No comments: 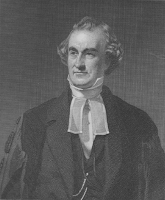 Today, 13th December 2018, marks the 150th anniversary of the death of Dr Henry Cooke. Dr Cooke was the great Protestant, Presbyterian Protagonist in this part of Ireland for half a century.

It has been said of Dr Henry Cooke that for half a century his life was a large portion of the religious and public history of Ireland.

During his days of public ministry for the cause of Jesus Christ he stood against the Arians and defended the doctrine of the Trinity; he argued for a thoroughly Christian education to be provided the schools of his day and he was unapologetically a Protestant and a unionist. 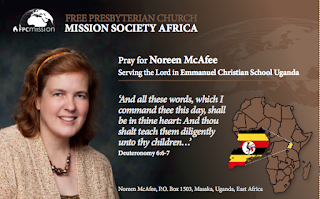 Miss McAfee will speak and a film will be shown of her work in Uganda
Read more »
Posted by Rev Brian McClung at Saturday, December 08, 2018 No comments: