Primark - the Fire and Support of the Sodomite Belfast Pride 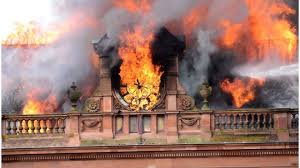 … for when thy judgments are in the earth, the inhabitants of the world will learn righteousness, Isaiah 26:9.

The building was undergoing a major refurbishment costing an estimated £30m. The building has been extensively damaged by the fire and at present the Fire Service is not able to say if the structure is safe. There are "grave concerns" that Bank Buildings could collapse, the fire service has told the BBC. See here 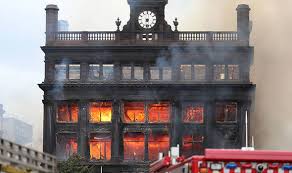 The 'bank building' as it has been known was originally erected by Waddell Cunningham in 1785. It survived the Troubles when three bombs exploded in the building in 1975. In 1979, the Bank Buildings were taken over by the present occupier, Primark.

Thankfully no one was injured and the building was safely evacuated before the fire spread. Although one person who was in the store has reported that when the fire alarm went off an announcement was made that it was just a routine alarm and that the shoppers would be allowed back in shortly. Parents left buggies and prams behind, as they were directed out of the shop, only to discover outside that the roof of the building was on fire and they were unable to re-enter the shop to claim their belongings.

Primark's Support of Belfast Pride
Primark was one of the most prominent sponsors of the sodomite Belfast Pride parade which took place in the city recently. A window display in the shop contained rainbow-draped mannequins and loudly proclaimed the store's links to Stonewall, the sodomite lobby group. 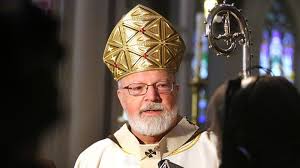 The Pope's top adviser on clergy sexual abuse has had to cancel his planned trip to Ireland because he has to investigate sexual misconduct in his own Seminary in North America.

Cardinal Sean O’Malley has backed out of a key speaking engagement in Dublin at the World Meeting of Families so that he might devote his time and attention to the unfolding scandal at St. John’s Seminary in Brighton.

The World Meeting of Families Conference is taking place in Dublin 21st - 26th August. The Pope is to attend the closing stages of the Conference.

Cardinal O’Malley is chairman of Pope Francis’ Pontifical Commission for the Protection of Children. He was expected to chair a panel discussion at the World Meeting of Families Conference titled 'Safeguarding Children and Vulnerable Adults.' The panel includes Dublin abuse survivor Marie Collins, who resigned from the Commission for the Protection of Minors last year in protest at the frustration of its work by Vatican officials. 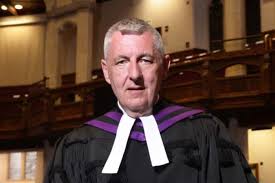 Love for Gospel of our Lord Jesus Christ and concern for the eternal souls of men will prevent any Bible believer from union or communion with a Roman Catholic Church that remains as contrary to Holy Scripture today as it ever has been.

As long as it proclaims its leader as the supreme head of the church on earth, denigrates the work that Christ completed on Calvary by the pretentious teachings central to its mass, refuses the scriptural way of salvation that justification is by faith alone in Christ alone, fleeces its adherents by means of an imaginary purgatory, and offers indulgences with as much aplomb as Tetzel managed in Martin Luther’s day, no true Christian should engage in fellowship with this system, never mind travel to welcome its Pope. 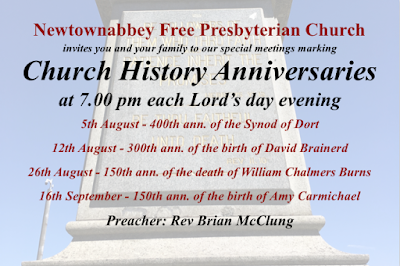 Posted by Rev Brian McClung at Saturday, August 04, 2018 No comments: 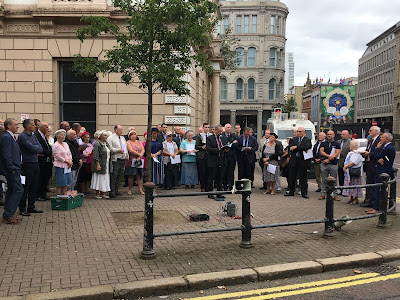 Rev Gordon Dane, moderator elect of the Presbytery, preached from 1 Corinthians 6:9-11: Know ye not that the unrighteous shall not inherit the kingdom of God? Be not deceived: neither fornicators, nor idolaters, nor adulterers, nor effeminate, nor abusers of themselves with mankind, Nor thieves, nor covetous, nor drunkards, nor revilers, nor extortioners, shall inherit the kingdom of God. And such were some of you: but ye are washed, but ye are sanctified, but ye are justified in the name of the Lord Jesus, and by the Spirit of our God.