A number of special religious services were held on the morning of Ulster Day, 28th September 1912, to mark the signing of the Ulster Covenant.

One service, attended by Lord Carson, was held in the Ulster Hall. Lord Carson appealed that there would be no applause but that the occasion would be treated as if it were a sabbath day service.

Dr M'Kean, a past moderator of the Presbyterian Church and fervent opponent of Home Rule, preached at this service. In the course of his sermon he said:
We are not seeking any changes – we are not attempting any revolution. We are plain, blunt men who love peace and industry, and pursue them. But we are also earnest, determined men, who wish to secure for ourselves and our children the priceless patrimony of freedom and the glorious heritage of civil and religious liberty under the flag of the Empire we have in some measure helped to build up. If we are refused these privileges it will be the basest betrayal of which any nation was ever guilty.
Read more »
Posted by Rev Brian McClung at Sunday, September 30, 2012 1 comment:

Please pray for the Free Presbyterian Outreach team as they engage in evangelism at the National Ploughing Championships this incoming week at Heath Park, New Ross, County Wexford. 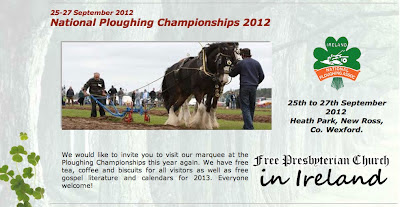 Over a dozen reasons why the argument for Exclusive Psalmody doesn't stand up, Part 2

Here is a second reason why the arguments for exclusive psalmody do not stand up:

2. Old Testament and New Testament saints
did not live by this exclusive psalmist rule.
If there is a Scriptural requirement to sing inspired praise you would expect to find examples of this among the saints of God in the Scriptures and none to the contrary. However, the opposite is the case. Instead of the saints of God singing inspired praise from the Psalter we find them composing their own items of praise, using different portions of the Old Testament, and following no set form from the Psalter. Saints from both Old and New Testament dispensations are found to have composed their own items of praise.

As is very obvious to observe the 150 Psalms of the Psalter existed long before the canon of Scripture was closed. If the 150 Psalms of the Psalter are to be the hymnbook of the Church then why does Habakkuk, Elisabeth, Mary, Zacharias & Simeon, to name some Scriptural examples, all compose their own items of praise, and in a number of cases long after the completion of the book of Psalms?
Read more »
Posted by Rev Brian McClung at Sunday, September 23, 2012 No comments:

Over a dozen reasons why the argument for Exclusive Psalmody doesn't stand up, Part 1

Does the Bible teach that we have only one book of inspired praise and that is the book of Psalms and therefore nothing of mere human composition is ever to be sung? I do not believe that it does. I don't believe that the Scriptures nor Church History agrees with the exclusive Psalmist position.

Here are a over a dozen reasons for believing so.

It is the premise of exclusive psalmists that these terms refer to the divisions of the Psalter in the Greek Septuagint version of the Old Testament.

Nick Clegg, the Deputy Prime Minister in the Westminster government, has had to withdraw the text of a speech he was going to make because it referred to those who opposed 'Gay Marriage' as 'bigots'.

This is despite a recent ComRes opinion poll conducted in the United Kingdom showing by a majority of 70% to 22%, the remainder undecided, there was agreement that "Marriage should continue to be defined as a life-long exclusive commitment between a man and a woman."

The funding of Sodomy in Northern Ireland Part 1

Details have come to light through a Freedom of Information request about the extent of the funding of Sodomy in Northern Ireland.

The details released only cover the last three years: 2009/10; 2010/11; 2011/12. Over £120,000.00 has been given during this short space of time to various sodomite groups across Northern Ireland. I wonder what the total would be if figures for years further back were released!

This is shameful in the extreme. The morality of funding sinful lifestyles is highly questionable in any climate but even more so in a day of cut backs and the lack of funding for many worthy causes.

No society can afford to fund sin in any form. The cost is too high. God brings nations down when they elect and then tolerate politicians who act with such flagrant disregard for God's moral law.


Posted by Rev Brian McClung at Monday, September 17, 2012 No comments:

The benefits of marriage

A study conducted in the United States has revealed that growing up with married parents vastly increases a child’s prospects of escaping poverty.

A stable home was found to raise a child’s chances of escaping the poverty trap by 82 per cent.

When equally well-educated families were compared, marriage increased a child’s chance of living above the poverty line by 75 per cent.

The research also found that just 7 per cent of children in families below the poverty line had parents who were married to each other.

However 37 per cent of children in families below the poverty level were in households where their parents were not married.

Proof again that: righteousness exalteth a nation: but sin is a reproach to any people, Proverbs 14:34.

The Faith of Lord Carson

This article first appeared in the Ulster Bulwark, the magazine of the Evangelical Protestant Society and kind permission has been granted to re-publish it here.


Edward Carson was born in Dublin on 9 Feb 1854. His father was a Presbyterian of Scots descent and his mother was Church of Ireland and a descendent of the Cromwellian General John Lambert. Carson was brought up in the Church of Ireland. He was taught the truth of the Bible by his mother. In his last major speech in Parliament, in the House of Lords in 1927, he said: ‘religion is a thing that you learn at your Mother’s knee ... Any religion I ever learned was from my Mother, and it is to me one of the most precious possessions’.

Carson studied law at Trinity College, Dublin, and joined the Orange Order as a student in 1872. A clergyman who was present at his initiation wrote ‘that he can bear witness that he was a decided Christian, and worked as an evangelist amongst students during his stay there’. This was confirmed by his biographer, Ian Colvin, who wrote that ‘as a law student at Trinity College he used to preach at street corners of a Sunday night; his religion was something very deep and very dearly cherished’. His legal career began in 1878 and on 19 December 1879, he married Annette Kirwan at Monkstown Parish Church, Dublin. Ten years later he became a QC. Aged 35. he was the youngest QC in Ireland. On 1 July 1892 he was appointed the Irish Solicitor General, and eight days later he became the Liberal Unionist MP for Trinity College, making his maiden speech in the House of Commons on 2 February 1893. After 1893 he built up a legal practice in England, and in May 1900 he was appointed Solicitor General for England. 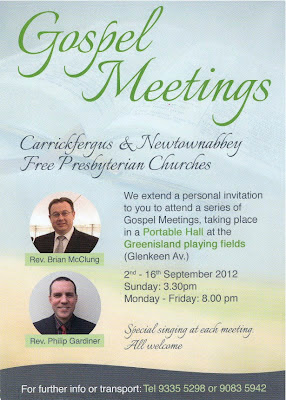 Please pray that souls will be converted

Posted by Rev Brian McClung at Monday, September 03, 2012 No comments:

Pageview details for the month of August 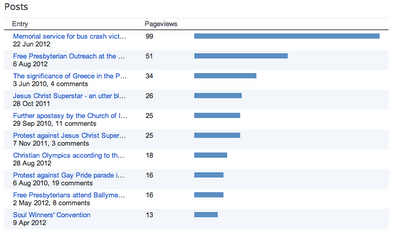 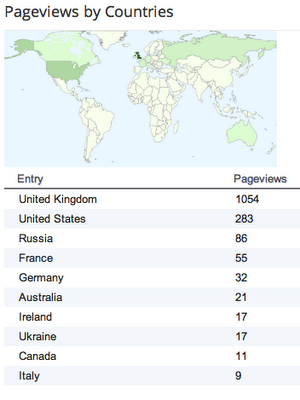 Pageviews details since May 2009 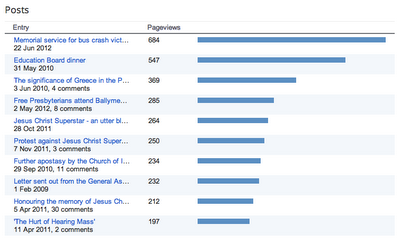 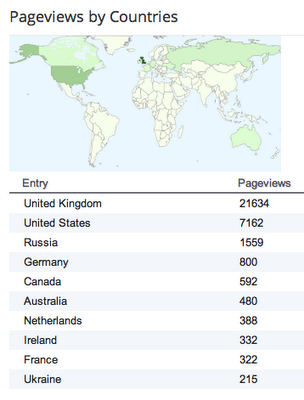 Posted by Rev Brian McClung at Saturday, September 01, 2012 No comments: