Psalm 119:126: It is time for thee, LORD, to work: for they have made void thy law.
Virtually everyone is aware that the year 2009 marks the 150th Anniversary of the 1859 Revival. That mighty outpouring of the Spirit of God began in Kells, Co Antrim and spread out over most of Ulster. The influence of the revival was also felt further afield to greater and lesser degrees.

Many of us, if not all of us, have heard of the prayer meetings that were commenced in the school house in Kells where the four men prayed. The names of these men are James McQuilken, Jeremiah Meneely, Robert Carlisle and John Wallace. Encouraged by Rev J.H. Moore, minister of the nearby Presbyterian church, these four young converts began to meet on a weekly basis for prayer and Bible study. They met in the old national schoolhouse.

The Errors of the Charismatic/Pentecostal Movement Part 1

These posts stem from a series of fifteen studies conducted, over the last year in our Youth Fellowship meetings, at the request of the young people who attend, dealing with the errors of the Charismatic/Pentecostal Movement

Study One - An Introduction
The word ‘Charismatic’ comes from the Greek word for 'gift' in the New Testament. It is used in at three distinct ways:
1. It is used in reference to the gift of salvation, Romans 6:23: …the gift of God is eternal life...

2. It is used with respect to the talents that are given to those who are called to labour in the service of Christ, 1 Timothy 4:14: Neglect not the gift that is in thee, which was given thee by prophecy, with the laying on of the hands of the presbytery.

3. It is also used in reference to the gifts of the Spirit. It appears for example in 1 Corinthians 12:4: Now there are diversities of gifts, but the same Spirit.

In the clamour to eulogise C S Lewis, on the 50th anniversary of his death, it is worthwhile remembering what this man believed, or more to the point what he didn't believe.

1. C S Lewis did not believe in the inerrancy of the Holy Scriptures. ". . . all Holy Scripture is in some sense – though not all parts of it in the same sense – the word of God." (Reflections on the Psalms). In a letter he wrote to Clyde Kilby, on 7th May 1959, he argued, "If every good and perfect gift comes from the Father of Lights, then all true and edifying writings, whether in Scripture or not, must in some sense be inspired."

One sympathetic Lewis scholar concluded that: "Lewis does not confine his religious views to the Bible but recognizes God’s revelation in literary masterpieces, in other religions, in ancient world myths, and through human reason and intuition. Christianity is true...not just because the Bible says so but because God chooses to reveal himself through many different ways, yet supremely through Christ," (Is C S Lewis in heaven? by John W Robbins).
Read more »
Posted by Rev Brian McClung at Wednesday, November 20, 2013 11 comments: 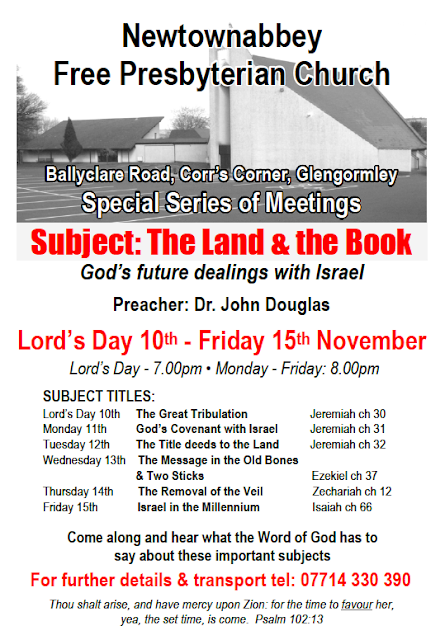 Here is a link to a new Blog which is well worth reading, especially from a Free Presbyterian viewpoint