He was present and took part in this memorial service as he now resides in the town and was deputising for the Mayor's chaplain. 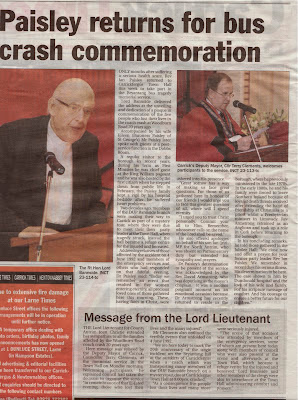 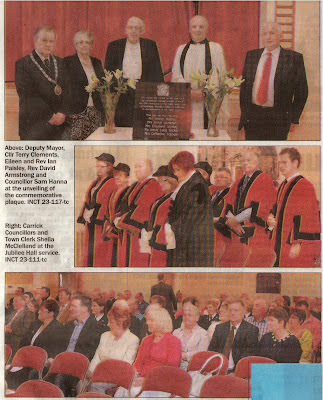 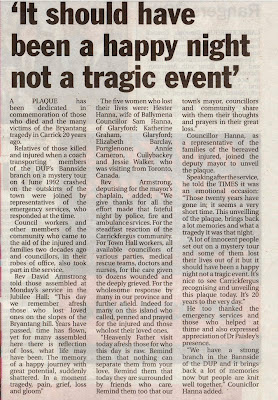 
CHRISTMAS PROTEST IN LIMAVADY
On Christmas Day, three of our Ministers led a protest in Limavady. Revs. Wesley McDowell, George Whyte and James McClelland with about forty Free Presbyterians from Garvagh, Londonderry, Coleraine and Limavady protested outside First Limavady Presbyterian Church. Suitable placards were carried and the leaflet, "Why Were Our Reformers Burned", was distributed. As Rev. David Armstrong, Minister of First Limavady, entered his church, Rev. McDowell challenged him to a public debate on the issue of ecumenism. Armstrong ignored the challenge and ran into his church. The protestors continued to remain outside the church. The RC service in the chapel ended at 11.15 a.m. and they witnessed our protest, some pouring scorn upon us, others laughed. At 11.20 a.m. the local priest, Kevin Mullan crossed from the chapel to First Limavady. Rev. McDowell presented him with the above mentioned leaflet and stated the reason why the protest was taking place. At this point also, the priest was confronted with a young converted RC. He was told that this young man was being hounded by a priest and persecuted by his family because he had been saved and was attending the church of his choice.

It was pointed out to the priest that if his church was in control, the very protesters before him, in all probability, would not be afforded the legitimate right they were now exercising.

The priest was welcomed with open arms into the Presbyterian Church.

Meanwhile, three Free Presbyterians had entered First Limavady Church earlier to observe the proceedings. At the end of the Service, when the priest was called to the front to speak, our brethren stood up, one of which, Mr. Paul Olphert, Londonderry, read a few verses, of Scripture (11 John 9-11) and then accused Rev. Armstrong of treason before God. Upon this, a number of men made for our brethren. Mr. Olphert was dragged by the hair out of the pew and down the aisle, and kicked between the legs. A medical examination later confirmed this. Our brother had a severe bruise about one foot long on the inside of his upper right leg.

The two other Free Presbyterians were similarly treated, being punched and kicked when the service ended and people gathered at the door of the church, Revs. McDowell and McClelland went to complain to Armstrong about the treatment doled out to our brethren. He ran like a scared rabbit into his church, and his members began to push us back. Rev. McClelland was struck on the face and subjected to abusive and foul language. It must be noted that in all this, not one Free Presbyterian retaliated, and as Rev. McDowell informed the police at 8.30 a.m. that morning that the protest would be peaceful - so it turned out to be, ON OUR PART.

A complaint was lodged with the police that day, and whilst doing so, Rev. McDowell was subjected to cheek and abuse by one of the officers in the station.

A subsequent talk with an officer indicated that in all probability the R.U.C. would try to get something on the protesters. The officer tried to dissuade Rev. McDowell from taking any action, suggesting that charges might be brought re disruption of a religious service and obstruction of a clergyman. It was pointed out that if it had been Free Presbyterians who had used violence, the last drop of blood would be wrung out of them. Subsequently Armstrong, in the Newsletter, adamantly denied that there had been any violence in his church. This man is prepared to lie to save his public face, but God knows the truth, and in the final analysis, that is what matters.

It must be noted that this affair is not merely about Christmas Greetings. During Christmas week, Armstrong was welcomed by R.C. Bishop in Londonderry, Edward Daly to St. Eugene's Cathedral, and the Presbyterian clergyman preached there. The same night after a torchlight procession through Londonderry, Kevin Mullan spoke in St. Columb's Cathedral. This was organised by a group of French origin - Taze - whose declared aim is to obtain unity around the chair of St. Peter.

Armstrong was also at Midnight Mass on Christmas Eve in Limavady. It has also been made known that Armstrong and Mullan will be going to a St. Patrick's Day Parade in U.S.A. The theme of that parade is to be reconciliation.

The situation in the Limavady Presbyterian Church is but a reflection of the situation in the Presbyterian Church as a whole. There are those in First Limavady who disagree with Armstrong's exploits, but he rides roughshod over them and even more disturbing, over the express Biblical teaching on the matter of ecumenism. A compromise has been reached in the Irish Presbyterian Church whereby such sinful activities as those taking place in Limavady, are tolerated. As in the case in Limavady, those who oppose ecumenism will soon be outnumbered and any resistance to the blasphemous and idolatrous dogmas of Rome will be weakened. The only Scriptural action to take is to, "Come out from among them, and be ye separate", 11 Cor. 6:17. [Emphasis added]

It would seem something or somebody has changed their views for David Armstrong to now be acceptable to speak and pray at a 'memorial service'. The same individual who sees nothing wrong in praying with priests and attending mass and who was accused of lying in 1985.

I am reminded of the words of Proverbs 28:9: He that turneth away his ear from hearing the law, even his prayer shall be abomination. David Armstrong for a long time has turned away his ear from hearing the law of God. As stated above ecumenism that embraces false religions, such as Romanism, is contrary to the plain teaching of Scripture. How can this man's praying be acceptable?
Posted by Rev Brian McClung at Friday, June 22, 2012

Rev David Armstrong sounds like he had to put up with a lynch mob! I hope he went on to find peace and happiness elsewhere. I am certain his old congregation missed him greatly after he left under such sad circumstances.

If only the protesters were so cautious not to cast a stone without first assessing their own status.