Nature Confounding Evolution - World War II planes buried under layers of ice which are supposed to be ten of thousands of years old. 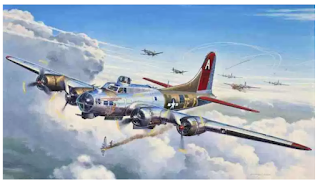 Nature often has a way of confounding those who set themselves against God and His truth. We are reminded in the Book of Psalms that God in heaven will laugh at the foolishness of those who reject Him, Psalm 2:1-4: Why do the heathen rage, and the people imagine a vain thing?  The kings of the earth set themselves, and the rulers take counsel together, against the LORD, and against his anointed, saying, Let us break their bands asunder, and cast away their cords from us. He that sitteth in the heavens shall laugh: the Lord shall have them in derision.

One example of nature confounding those who set themselves against God and His truth is observed in the account of the World War II planes that were buried under layers of ice which were supposed to be ten of thousands of years old.

The incident is detailed by Creation Ministries International (CMI) in one of their Creation magazine articles. The article in question is entitled The Lost Squadron and is to be found in Creation 19(3) June 1997.

C. H. Spurgeon preached on the First Resurrection on the Lord's day morning 5th May 1861 at the famous Metropolitan Tabernacle, London.

This is what he said towards the commencement of his sermon on how the reference to the first resurrection in Revelation 20:4-6 should be understood:

Before I proceed to enter into these privileges, I must remark that two  modes of understanding this verse have been proposed, both of which I think are untenable.