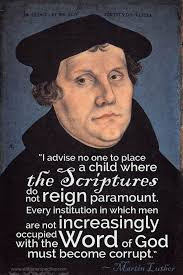 Reformation. In 1524 he wrote to the leaders in Protestant cities of Germany urging them to set up Christian schools [Vol. 4 of his works] He denounced the universities of his day as, 'dens of hell'.

It is no surprise that he commenced schools from primary level up to university level. Luther was known as the father of popular education and the application of his principles made the land of Luther the land of libraries and schools.

It was Luther's deputy Melanchthon, 1497-1560, who concentrated on setting up an educational system and in particular secondary schools. He was known as the 'Creator of Protestant educational system in Germany.' He wrote textbooks on Latin and Greek grammar, psychology, ethics, history and religion. In the universities established professors had to be bound by the confessions of the church.


Luther's had praise for Christian school teachers: I tell you in a word that a diligent devoted school teacher, preceptor or any person, no matter what is his title is, who faithfully trains and teaches boys, can never receive an adequate reward and no money is sufficient to pay the debt you owe him, yet we treat them with contempt as if they were of no account whatever and all the time, we profess to be Christians. For my part, if I were compelled to leave off preaching and to enter some other vocation I know not an office that would please me better than that of schoolmaster, or teacher of boys.

For I am convinced that next to preaching, this is the most useful and greatly the best labour in all the world, and, in fact I am sometimes in doubt which of the positions is more honourable. For you cannot teach an old dog new tricks, and it is hard to reform old sinners but this is what by preaching we undertake to do and our labour is often spent in vain, but it is easy to train and bend young trees though haply in the process some may be broken. My friend, nowhere on earth can you find a higher virtue than is displayed by the stranger who takes your children and gives them a faithful training, a labour which parents very seldom perform even for their own offspring.
Posted by Rev Brian McClung at Thursday, April 27, 2017 No comments: 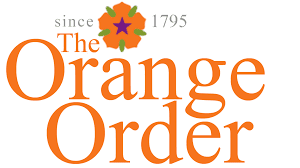 A display entitled Staunch And True at the Museum of Orange Heritage examines the impact and legacy of the event. The Grand Master of the Grand Orange Lodge of Ireland, Edward Stevenson, said: Our latest major exhibition provides an informative insight into the historical context of the Reformation and how its powerful legacy impacted and inspired future generations.

How many Members, Officers, Lodges and Districts within the Orange Order will say or do anything about this breech of their rules? Virtually none of them! They will turn a blind a blind eye to what has happened. When or where opposition to attending the mass might be raised it sill not receive the necessary support to pursue the matter, which always becomes a convenient excuse for any who are challenged about it. However no one resigns in disgust at the compromise.

This is double standards. They pretend to honour Luther on one hand for his stand for Truth, yet on the other refuse to stand themselves for what is true.
Read more »
Posted by Rev Brian McClung at Wednesday, April 19, 2017 No comments:

Nothing more needs to be said about the real Martin McGuinness than the wording of the epitaph on his tombstone, albeit some of it written in Irish. 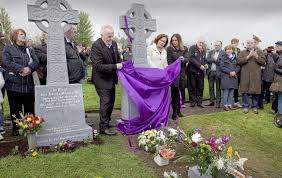 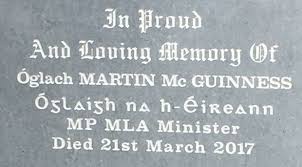 The word 'Oglach' means volunteer, the term Óglaigh na hÉireann” is a name the IRA uses to describe itself.

In death Martin McGuinness remained wedded to the IRA and its murderous campaign of genocide that it ruthlessly pursued for over 30 years in Northern Ireland. He is honoured in death as a volunteer of the IRA by those who knew him best. Enough said!

What utter fools are those within the unionist community who were taken in by this terrorist masquerading as a politician. McGuinness was like the individual spoken of by the Psalmist: The words of his mouth were smoother than butter, but war was in his heart: his words were softer than oil, yet were they drawn swords, Psalm 55:21.

What hope is there for this Province when it is led by such gullible unionist politicians and their acolytes?

Posted by Rev Brian McClung at Wednesday, April 19, 2017 No comments: