The following statement has been posted on the FPC Government and Morals Blog site and sent to the Press.


Policing and Crime Bill: Legislative Consent Motion
On the 28th November, the above titled motion was brought before the floor of the Northern Ireland Assembly. The motion stated –
That this Assembly endorses the principle of the extension to Northern Ireland of a number of provisions within the Policing and Crime Bill, by amendment at Lords Committee and Lords Report stage, in so far as they related to UK maritime enforcement powers; UK cross-jurisdictional arrest powers; anonymity for victims of forced marriage and pardons for convictions of certain abolished offences.

The final part of this motion included “pardons for convictions of certain abolished offences” and was an amendment that had been introduced to the Policing and Crime Bill at the committee stage in the House of Lords by Lord Sharkey of the Liberal Democrats. This amendment appears to have been fast-tracked through the Justice Committee to be presented before the Northern Ireland Assembly. 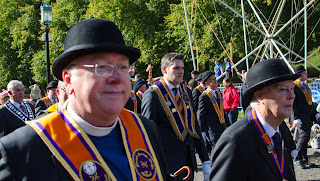 This is in spite of, or maybe because of, his recent comments where he expressed a desire that members of the Orange Order would be allowed to attend The Mass without the threat of discipline.


Forbidden attendance
At present the Orange Order has a rule that forbids members to attend or take part in a Roman Catholic Mass. This rule is seldom applied as evidenced when the then Ulster Unionist Party leader Tom Elliott and the then Regional Development Minister Danny Kennedy were not disciplined for attending the funeral of a murdered Roman Catholic PSNI officer, although a complaint was made against them.

Rev Gibson when questioned, in an interview, about his own personal opinion of the rule stated that he would like to see the rule go.

His justification for doing so is that he believes his faith is strong enough to be permitted to attend the Mass.

No Pope Here! Why? #4 The cost to Taxpayers

A papal visit always incur a considerable cost to the public purse and ultimately to taxpayers. The Pope may claim empathy with the poor, and engage in pretended acts of sympathy and compassion, but the reality is somewhat different.

By claiming to be a 'Head of State' a papal visit to another country is regularly deemed an official state visit. It is only visiting 'Heads of State' who can be given such a honour. Not all visits by Heads of State are given the honour of a State visit. Some are deemed unworthy of such an honour, either because of political sensitivities or insignificance. Some visits by Heads of State are deemed an 'Official Visit', or a 'Working Visit', or a 'Private Visit'.

It is one of the old papal claims that the Pope is a monarch of great honour, who rules over all other monarchs and presidents. He is also Head of State of the Vatican. He deems himself to be worthy of a state visit.

By recognising the claims of the Pope and affording him a state visit, the government of the day would normally cover the cost of that visit.

Will that happen in Northern Ireland? Will taxpayers have to pay for the Pope to visit Northern Ireland? If so, then how much will it cost and who is going to pay? Will Rome, or the Roman Catholic Church, cover the costs of such a visit?

No Pope Here! Why? #3 The Memory of the Martyrs.

History furnishes abundant proof of the crimes committed against those who would not bow the knee to the Pope and his Church. The memory of the martyrs would compel us to resist a papal visit.

The Papacy is the institution that has put an untold number of martyrs to death. Rome hasn’t changed one iota. She would do the same today if she could get away with it. Therefore we continue to resist the Pope’s claims and say No Pope here.

The Protestant Echo, away back in July 1903 reckoned that since the rise of the Papacy 50,000,000 people had been put to death in various ways for their religion by the end of the 19th century.

Many of the most horrendous crimes against humanity have been committed by the Church of Rome throughout the history of her existence. Her persecution of Protestants and other 'heretics' is the inevitable result of her belief in the absolute power and infallibility of the Pope. Persecution is the natural outgrowth of these Papal dogmas.


Rome has a long history of terror in our own nation. There were hundreds of Protestant martyrs who lost their lives at the hand of popish rulers in this United Kingdom. There are scores of martyrs sites all over England. 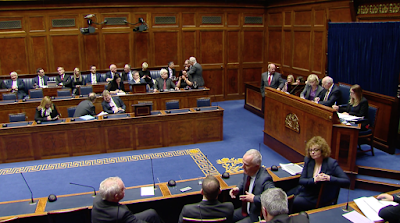 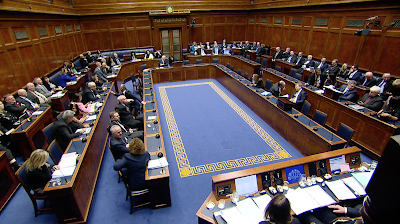 No Pope Here! Why? #2 The Act of Settlement

Any proposed visit by the Pope is to be opposed on constitutional grounds. The Act of Settlement underpins the British Constitution and safeguards the British throne from ever being influenced by Roman Catholicism again.

The Act of Settlement was passed in 1701. It came into being at the end of the reign of King William III, when his successor to the throne, Anne, had lost her only surviving child. It was felt expedient by Parliament, at that time, to bring into law a requirement that only Protestants, in communion with the Church of England, should be allowed on the throne.

1. Westminster Confession of Faith - the confessional creed of the Presbyterian Church in Ireland:
CHAPTER 23 - Of the Civil Magistrate section 4: It is the duty of people to pray for magistrates, to honour their persons, to pay them tribute and other dues, to obey their lawful commands, and to be subject to their authority, for conscience' sake. Infidelity, or difference in religion, doth not make void the magistrates' just and legal authority, nor free the people from their due obedience to them: from which ecclesiastical persons are not exempted; much less hath the Pope any power and jurisdiction over them in their dominions, or over any of their people; and, least of all, to deprive them of their dominions, or lives, if he shall judge them to be heretics, or upon any other pretence whatsoever.

No Pope Here! Why? #1 His Blasphemous Claims

The reasons for opposing a visit by the Roman antichrist are numerous. One reason is the many blasphemous statements made by the Pope of Rome. History is replete with the statements made by different Popes or else made by other Romanists about the Papacy. They have never been shy in stating their claims. Rome might be a little embarrassed in modern times about the antics of her priests, bishops and Popes but these claims have never been denied or disowned.