Studies in the Westminster Confession of Faith - Chapter One - Part 2

Part Two - Chapter One continued
Of the Holy Scripture - Section I
Although the light of nature, and the works of creation; and providence, do so far manifest the goodness, wisdom, and power of God, as to leave men inexcusable; yet are they not sufficient to give that knowledge of God, and of His will, which is necessary unto salvation. Therefore it pleased the Lord at sundry times, and in divers manners, to reveal Himself, and to declare that His will unto His Church; and afterwards, for the better preserving and propagating of the truth, and for the more sure establishment and comfort of the Church against the corruption of the flesh, and the malice of Satan and of the world, to commit the same wholly unto writing; which maketh the Holy Scripture to be most necessary; those former ways of God's revealing His will unto His people being now ceased.

There are four propositions that arise out of this section. We have already noted the first two:
1. The light of nature and the works of creation and providence are sufficient to make known the fact that there is a God, and somewhat of His nature and character, so as to leave the disobedience of men without excuse.
2. The knowledge attainable from the light of nature is insufficient to give fallen man that knowledge of God, and of His will, which is necessary unto salvation. This is proved to be true.
We are coming to the next two:

A bit of a squabble has broken out between a Liberal Democrat member of the Westminster government and Lord Carey, the former Archbishop of Canterbury.

Lord Carey had written an article for the Daily Mail in which he stated that neither the State or the Church owned marriage.
See - Marriage will ONLY remain the bedrock of a society if it is between a man and a woman

Equalities minister Lynne Featherstone in an article in today's Daily Telegraph has responded by saying that as marriage is owned by the people and not by the Church nor the State, the government could introduce same-sex marriages as a "change for the better".
See - Lynne Featherstone tells Church 'don't polarise gay marriage debate'


Lord Carey has responded by accusing Lynne Featherstone of putting an "unwarranted slant" on his words.
See - Church 'does not own marriage'
Who own marriage?
Marriage is one of only two institutions that predate the Fall of our first parents, Adam and Eve, into sin in the Garden of Eden at the beginning of time. The Sabbath day is the other.
God owns marriage! He instituted marriage and ordained that marriage be between one man and one woman. In the beginning He created them male and female, Gen 1:27: So God created man in his own image, in the image of God created he him; male and female created he them.
Read more »
Posted by Rev Brian McClung at Saturday, February 25, 2012 No comments:

Petition in support of traditional marriage

Please sign the Petition in support of traditional marriage - here

Letting gays marry would be wrong, Carey tells Cameron as former archbishop says proposal is 'one of the greatest political grabs in history'


Posted by Rev Brian McClung at Thursday, February 23, 2012 No comments:

The cost of sin to society

The Christian Institute website is carrying an interesting article about the cost to society of immoral living. It contains research carried out by the Jubilee Centre [see information on front page of blog about the policy of linking to external sites].

It reckons that around £100 billion is spent each year dealing with the problems that come from sinful living. No nation will prosper that abandons Bible morality: Righteousness exalteth a nation: but sin is a reproach to any people, Proverbs 14:34. 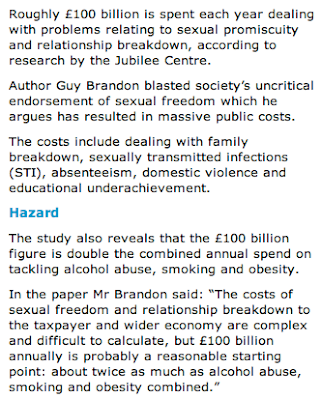 
Posted by Rev Brian McClung at Wednesday, February 15, 2012 No comments:

It is hard to kick against the pricks!

Every time I read or hear anything of what Richard Dawkins says I am always reminded of the words that the Lord Jesus Christ spoke to Saul of Tarsus on the Damascus road and recorded in Acts 9:5:

And he said, Who art thou, Lord? And the Lord said, I am Jesus whom thou persecutest: it is hard for thee to kick against the pricks.
Once again Richard Dawkins is in the news. This time the embarrassment is his in that he boasted of being able to reel of the full title of his hero Charles Darwin's famous work: Origin of Species. Yet when pressed to do so on Radio Four's Today programme he stumbled over the title and took the Lord's name in vain.
The full title of Darwin's work, which runs to 21 words, is: On The Origin of Species by Means of Natural Selection, or The Preservation of Favoured Races in The Struggle for Life.

In Psalm 129:5 of his commentary entitled Treasury of David C H Spurgeon said:

How can we wish prosperity to those who would destroy that which is dearest to our hearts? This present age is so flippant that if a man loves the Saviour he is styled a fanatic, and if he hates the powers of evil he is named a bigot.
As for ourselves, despite all objectors, we join heartily in this commination; and would revive in our heart the old practice of Ebal and Gerizim, where those were blessed who bless God, and those were cursed who make themselves a curse to the righteous. We have heard men desire a thousand times that the gallows might be the reward of the assassins who murdered two inoffensive men in Dublin, and we could never censure the wish; for justice ought to he rendered to the evil as well as to the good.
Besides, the church of God is so useful, so beautiful, so innocent of harm, so fraught with good, that those who do her wrong are wronging all mankind and deserve to be treated as the enemies of the human race. Study a chapter from the "Book of Martyrs", and see if you do not feel inclined to read an imprecatory Psalm over Bishop Bonner and Bloody Mary. It may be that some wretched nineteenth century sentimentalist will blame you: if so, read another over him.

Posted by Rev Brian McClung at Friday, February 10, 2012 No comments:

Studies in the Westminster Confession of Faith - Chapter One

Part Two - Chapter One
The Westminster Assembly meeting initially on 1st July 1643 and consisted of 30 laymen [10 lords and 20 commoners] and 121 divines.

On October 12, 1643, in the aftermath of the signing of the Solemn League and Covenant between England and Scotland, the Westminster Assembly was added to with Scottish representatives and subsequently received a new directive from Parliament that the divines should forthwith:
"confer and treat among themselves of such a discipline and government as may be most agreeable to God's holy Word, and most apt to procure and preserve the peace of the church at home, and nearer agreement with the Church of Scotland and other Reformed Churches abroad."
The W.C.F. subsequently sat for 5 years, 6 months and 21 days; in which time it held 1,163 sessions; with an average attendance 80-90. Their formal existence ended on 22nd February 1649.

In this study we are coming this evening to commence a consideration of the Confession itself.
Read more »
Posted by Rev Brian McClung at Wednesday, February 08, 2012 1 comment:

They wouldn't do it to Allah or Muhammad!!

In January 2008, Gordon Brown's Labour Government announced that they would consider the abolition of the blasphemy laws during the passage of the Criminal Justice and Immigration Bill through Parliament.

In March 2008 the House of Lords voted for the laws to be abolished and on 8th May 2008, the Criminal Justice and Immigration Act 2008 passed through the House of Commons bringing to an end the common law offences of blasphemy and blasphemous libel in England and Wales.  The law was to take effect from 8th July 2008.
At the time it was said that the blasphemy law was outdated and no one had been prosecuted under that law for some considerable time.
The Labour Government consulted with the Church of England and other churches before reaching a decision. Leading figures within the Church of England, including Lord Carey, former Archbishop of Canterbury, shamefully urged that the laws be repealed.
The harvest of that repeal has begun to come forth this past week!
A 19 minute long film entitled 'Visions of Ecstasy' and banned for 23 years under these blasphemy laws has now been passed for release, uncut, and given an '18 certificate', which enables it now to be shown in parts of the United kingdom.