The response of the Westminster government to the Islamic 'Trogan horse' scandal of schools in Birmingham, is to require that 'British values' are promoted in all schools. But this surely begs the question: what are 'British values'? Much discussion has ensued about the subject and the definition. Surely there is an argument for saying that British values must be Christian and Bible based values. The Government are doing their best to define 'British values' without any reference to the Bible or to our Protestant heritage and history. They will struggle to do so!

It has been classed as Ulster's forgotten Revival. It took place in 1625 along the Sixmilewater valley is south Antrim. The valley of the Sixmilewater runs from Larne, the river rising about four miles south west of Larne and passes through Ballynure, Ballyclare, Doagh, Templepatrick and Antrim into Lough Neagh.

Click on the picture of the Sixmilewater to watch a DVD about the Revival compiled by Mr Robert Campbell. 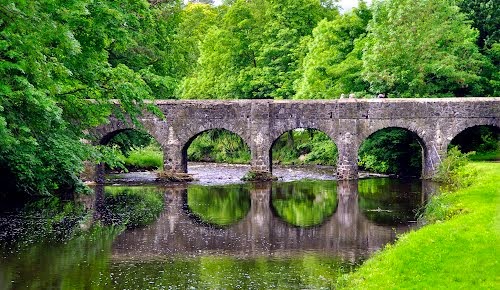 Posted by Rev Brian McClung at Wednesday, June 18, 2014 No comments:

Here are two further reasons why believing and teaching Creationism is scientific [For Part One click here]:

3. Creationism is as scientific as evolution and we believe much more so. The belief in creationism and the belief in evolution stand upon similar foundations. To a considerable degree they are faith based beliefs.

If we think that this is not true about evolution then observe some words which appear in the introduction to one edition of Darwin's Origin of Species:

The fact of evolution is the backbone of biology, and biology is thus in the peculiar position of being a science founded upon a unproven theory - is it then a science or a faith? Belief in the theory of evolution is thus exactly parallel to belief in special creation - both are concepts which believers know to be true but neither, up to the present, have been capable of proof. [Found on page xi of the Introduction to an edition of The Origin of Species, by Charles Darwin, published in 1971 by J.M. Dent & Sons]

Is believing and teaching Creationism* Scientific?

The evolutionist will emphatically say no. Belief in Creationism could never be equated with science, they say. The claim is often made that all scientists believe in evolution. For this reason the teaching of evolution must alone be permitted to enter the Science classroom. The study of Creationism is banished from the Science classroom and found only in the Religious Studies classroom.


Consider some salient facts:
I. Evolution simply doesn't have all the science on its side. That is a false claim they make!
There are eminent, present day, scientists who believe in a literal six day creation. A book entitled "In Six Days" was in recent years researched and published containing the views of 50 scientists who were asked to give their personal response to the question: "Why do you believe in a literal six-day biblical creation as the origin of life on earth?"

These 50 modern day scientists have all earned a Doctorate from a state-recognised university in the United Kingdom, the United States, Australia, Canada, South Africa, or Germany. These 50 scientists come from a variety of backgrounds. They include university professors and researchers, geologists, zoologists, biologists, botanists, physicists, chemists, mathematicians, medical researchers, and engineers.

The Destruction of Antichrist

November 1414 - The Council of Constance convened in Germany. Before it closed, it ended the Great Schism by deposing three rival popes, executed reformers John Huss and Jerome of Prague, and condemned the teachings of the English reformer John Wycliffe.
Read more »
Posted by Rev Brian McClung at Tuesday, June 10, 2014 No comments:

Modesty of Behaviour and Dress