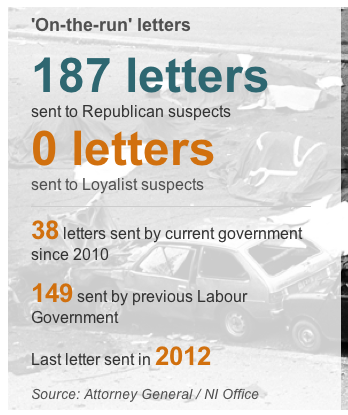 The revelation that a sordid litany of amnesty deals have been agreed with IRA terrorists so that they can escape prosecution for their vile crimes is the latest revelation to surface to indicate the squalid nature of the 'Peace' that presently exists in Northern Ireland. See here.

What makes it all the more nauseating is that IRA/SinnFein, and their ilk, have been lobbying vociferously to have soldiers and policemen held accountable for their actions in lawfully combating terrorists during the Troubles. It is little wonder they can't keep the smirk off their face as they chuckle their way through government.

Any peace process that involves buying off the terrorist; the subsequent elevation of these same terrorists to high government office and all the other concessions to the perpetrators of terror is immoral, unethical and unscriptural. Those who have long argued this to be the case are justified with every passing day in opposing what passes for government at Stormont.

It was back in September 2013 that the possibly of international Sunday football was first mentioned. See here. UEFA, the European football governing body, indicated that they were taking control of arranging the fixtures of their qualifying competition rather than the countries themselves. This was part of UEFA's plans to maximise television revenue and exposure for the tournament. That change would inevitably bring about the situation where Northern Ireland would end up playing a home international fixture on the Lord's day.

For decades Sunday football was not allowed to be played in Northern Ireland at all. It was six years ago that the Irish Football Association decided to change that rule allowing teams to play on the Sabbath day. A few Irish League sides have done so, but not the international team.

Sabbath observance has been sacrificed once again on the altar of commercial advantage. This is the new god that is worshipped today!

Studies in the Westminster Confession of Faith - Chapter One - Part 7

Once a month since September 2010 at our midweek prayer meeting & Bible study we have been studying the Westminster Confession of Faith. This and subsequent posts DV overtime on the Blog will contain the notes which were handed out on each occasion. An audio recording of this study can be listened to on the Church's SermonAudio page - click here

Part Seven - Chapter One continued
We are coming to consider section 8 of the opening chapter of the Westminster Confession of Faith. It reads:
The Old Testament in Hebrew (which was the native language of the people of God of old), and the New Testament in Greek (which at the time of the writing of it was most generally known to the nations), being immediately inspired by God, and by His singular care and providence kept pure in all ages, are therefore authentical; so as, in all controversies of religion, the Church is finally to appeal unto them. But, because these original tongues are not known to all the people of God, who have right unto, and interest in the Scriptures, and are commanded, in the fear of God, to read and search them, therefore they are to be translated into the vulgar language of every nation unto which they come, that the Word of God dwelling plentifully in all, they may worship Him in an acceptable manner; and, through patience and comfort of the Scriptures, may have hope.
Proof Texts: Matthew 5:18; Isaiah 8:20; Acts 15:15; John 5:39, 46; 1 Corinthians 14:6,9,11,12,24,27,28; Colossians 3:16; Romans 15:4.

This eighth section of chapter one teaches:
1. The originals sacred text has come down to us in a state of essential purity.
2. The original Scriptures are the final court of appeal in all controversies of religion.
3. That the Scriptures should be translated into the common language of all people.

Errors of the Charismatic/Pentecostal Movement Part 4

While no one can deny that these supernatural gifts existed in the early New Testament Church, it is also undeniable that the Scriptures clearly teach that these gifts were to cease. Church history also clearly illustrates this to be the case.

Philip is a classic example of this when preaching in Samaria. His preaching, and the exercise of these gifts, was met with considerable success, Acts 8:5-8: Then Philip went down to the city of Samaria, and preached Christ unto them. And the people with one accord gave heed unto those things which Philip spake, hearing and seeing the miracles which he did. For unclean spirits, crying with loud voice, came out of many that were possessed with them: and many taken with palsies, and that were lame, were healed. And there was great joy in that city.
Read more »
Posted by Rev Brian McClung at Wednesday, February 19, 2014 No comments:

Psalm 16:6: The lines are fallen unto me in pleasant places; yea, I have a goodly heritage.
The last subject we want to consider in remembering the mighty moving of God in 1859 is that of the Heritage or the Legacy of the Revival. Any work which is really of God will stand the test of time. If the Revival was all of the flesh, and not of God, then it would disappear as darkness does before the rising sun.

I believe we can see many evidences that the Revival was indeed of God and that its effects did last. No work of God continues for ever. God moves at a particular time and revives His cause and over time the decline sets in once again and there is need for the Lord to revive once again. That is why we read of the Psalmist praying: Wilt thou not revive us again: that thy people may rejoice in thee? Psalm 85:6.
Read more »
Posted by Rev Brian McClung at Monday, February 10, 2014 No comments:

Errors of the Charismatic/Pentecostal Movement Part 3

The Attorney General for Northern Ireland, Mr John Larkin has criticised the United Kingdom’s Supreme Court for finding against Peter and Hazelmary Bull who refused to rent a double room to a sodomite couple.

Mr Larkin said that November’s decision by the Supreme Court seemed to leave such Christians with the option of either leaving business or "being complicit in what the Christian must regard as deeply sinful".