#4. Invention - In seeking to combat the spread of Reformation teaching the Papacy created the ‘Index of Prohibited Books’, known in Latin as the ‘Index Librorum Prohibitorum’.  This index listed the books which Romanism would not allow to be read or circulated, wherever she had any influence. Included on this list of forbidden books, as you can imagine, was the Bible in the common language of the people.

The Index of Prohibited Books existed for over four hundred years. The index was only cancelled by Pope Paul VI as recently as 14th June 1966. 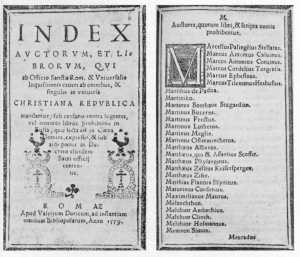 In addition to the Inquisition, the Catholic Church tried to find other ways to stop the spread of the Protestant movement. Much to the dismay of the Church, Gutenberg’s printing press had made Luther’s criticism and so-called heretical statements more readily available.

To a great extent it was due to the fact that Luther’s 95 Thesis, having been initially written in Latin, were taken down and translated into German and then printed and circulated widely that made the Protestant ideas so very difficult to contain. Rome greatly feared the outcome if the circulation of the Truth continued.

Therefore, in an effort to prevent further growth of the Reformation, the Catholic Church invented the Index of Forbidden Books. The creation of such an Index of Prohibited Books was with the single purpose of stopping the spread of the Reformation and to protect the Catholic church’s interests. It wasn't for the spiritual or moral good of the people. Rome only cared for herself and the maintenance of her hold over the people. Ignorance was her preferred weapon. 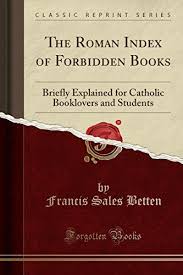 The first ‘Index of Forbidden Books’, was drawn up by the Sacred Congregation of the Roman Inquisition on the orders of Pope Paul IV and published in 1559. This index was subsequently published in 19 editions, by different Popes, through the following centuries. The last edition was published in 1948. As already stated the index was only brought to an end as recently as 1966.

A justification for this forbidden index was written by Francis S. Betten, of St. Ignatius’ College, Cleveland, Ohio in the early 1900s. In the section on the power of the Church he claimed:
That the Church has the right to legislate on the publication and use of all books that touch on questions of faith and morals, must be evident to every Catholic. It is a truth clearly contained in the words of Christ to St. Peter: “Feed my lambs, feed my sheep”; and in the duty imposed “teaching the faithful to observe all, whatsoever I have commanded.”

The fact that general councils as well as many popes have issued laws and de crees regarding books, is sufficient evidence of their power and of their commission to do this. This very fact must also convince us that the observation of these laws must be salutary and conducive to the welfare of the Church at large and of the individual Christian.

The inventions, discoveries and progress of our times can introduce no change in this respect. The human mind is still as prone to err and as much subject to the persuasive influence of books as it ever was. Good books are as useful to-day as they were in olden times, and objectionable writings have the same deplorable effects they had a thousand years ago.

Nor can the Church, possessing the power to watch over our reading, neglect to make use of this power when the salvation of souls calls for its exercise. Bad literature is one of the worst enemies of mankind. The Church can never allow it to corrupt the hearts of her children or to undermine the foundation of their faith, without at least raising a warning voice.

How great are the precautions the civil authorities take in case of an epidemic; yet, no matter how seriously the precautions hamper traffic and trade, we find them reasonable. We should even censure our executive and legislative officers if they omitted to take proper precautions. But, says Pope Leo, in the Constitution Officiorum ac munerum, "nothing can be conceived more pernicious, more apt to defile souls than uncurbed license in the writing and disseminating of bad books."

"Therefore", he continues "the Church, whose office it is to watch over the integrity of faith and morals, has ever striven, as far as in her power lay, to restrain the faithful from the reading of bad books as from a deadly poison."

When the ‘Index of Forbidden Books’ was published, it named and shamed 583 heretical texts, including the works of Erasmus, Luther and Calvin. Needless to say that the list included the Bible in the common language of the people. The efforts made to seize and burn Tyndale’s New Testament as it was being smuggled into England are widely known.

This list of books and other printed documents was distributed throughout Europe. Some of the works on the Index of Forbidden Books were not from Protestant Reformers. The listed of banned books included scientists and humanists, such as Galileo in 1633. The Inquisition also made it a reason for punishment if someone was found to be in possession of a banned book.

With the invention of the printing press in Europe in the middle of the 15th Century, the problem of control increased. As more books were written, copied and increasingly widely disseminated, subversive and heretical ideas were spread beyond control.

Despite it best efforts the Catholic Church could not curtail the speed of the Truth. Due to the success of the printing press, the Protestantism spread and grew into an international movement, instead of staying contained within Germany.

Whatever efforts were made by the Church hierarchy in trying to ban and burn the published documents, the printing press made it easy to make duplicates to prevent the lost of Reformation teaching.

Some of the Books listed on the index were the works of Maimonides, Joseph Addison, Daniel Defoe, John Milton and Edward Gibbon, who penned the classic: The Decline and Fall of the Roman Empire, to name but a few.
Posted by Rev Brian McClung at Tuesday, December 05, 2017