Romish Principles
A number of specific principles featured in this attempt to counter the Reformation:
1. Artists should focus on the distinctive aspects of Catholic dogma, including: The Immaculate Conception, The Annunciation of the Virgin, The Transfiguration of Christ, and others. Also, any explicit portrayal of Christ's suffering and agony on the Cross was deemed to be especially uplifting, and also served to illustrate the Catholic doctrine of Transubstantiation in the Eucharist.

The roles of the Virgin Mary, the Saints and the Sacraments were also a distinctive feature of Catholicism and were to be illustrated accordingly. To combat Protestant attacks on the saints and Mary, artists were to focus explicitly on the Virgin Mary. Mary's innocence, kindness, and mourning for Christ were to be depicted.

3. So that paintings and statues were as understandable and as relevant to ordinary people, as possible, this form of 'Art' was to be powerful, direct and compelling in its narrative presentation, and should be rendered in a clear, accurate fashion, without unnecessary or imaginary embellishments. 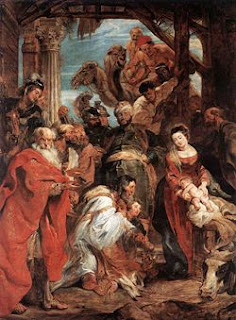 This use of the 'Arts' developed what became known as the Baroque era where realism and emotion dominated art style. The goal was part of the Counter-Reformation strategy. In Rome with the likes of Bernini and in Flanders with Peter Paul Rubens, the aim was was to restore Catholicism's predominance and centrality. Some painters, such as Federico Barocci (1526-1612) changed their style of painting to comply with the Council of Trent.

Rome used ‘Baroque Art’ to portray the power and spirituality of the Roman Church as a force for good, and reinforced Romish doctrine in the mind of adherents. These works of art could be viewed by all in churches, cathedrals, and other public places. The style began around 1600 in Rome and  Italy, and soon spread to most of Europe.

These techniques were employed throughout Europe, especially in areas like France, southern Germany, the Netherlands, Poland, Bohemia and Hungary.

Thus Rome sought to make an impression on the minds of her adherents by visual arts rather than by the preaching of the Gospel. Just another in a long line of schemes to counter the Reformation.

For previous schemes employed by Rome in the Counter-Reformation click on this link.
Posted by Rev Brian McClung at Monday, January 07, 2019