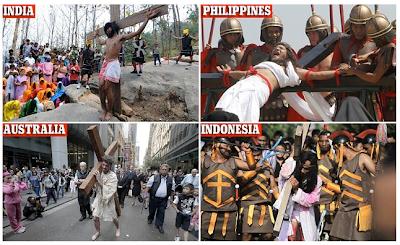 However, there is no Scriptural warrant for this type of behaviour. This type of activity is the very thing that is warned against in the Bible: But after that the kindness and love of God our Saviour toward man appeared, Not by works of righteousness which we have done, but according to his mercy he saved us, by the washing of regeneration, and renewing of the Holy Ghost; Which he shed on us abundantly through Jesus Christ our Saviour; That being justified by his grace, we should be made heirs according to the hope of eternal life, Titus 3:4-7.

You do not read in the Bible of this type of practice marking the Christianity of the New Testament Church. It was unheard of and would have been repudiated by the Apostles and first century Christians. It is not external acts like these that save the soul or gain favour with God. There is none that doeth good, no not one is the commentary of the Scriptures upon all the efforts of sinners to attain some favour from God by their own efforts.

It is the not the wood of the cross that is significant but the work of the cross. It is not the sign of the cross but the salvation of crosswork of Christ that is necessary.

These people will be much the worse physically as a result of their efforts; but they will not be any better spiritually before God. Christ became obedience unto death, even the death of the cross, Phil 2:8, so that we need not have to endure the crushing load of our sins which would sink us into hell.

Christ's death is remembered, with personal benefit to His own redeemed people, simply through the communion feast, as instituted in the Scriptures, Matthew 26:26-29; 1 Corinthians 11:23-34. It the eating of bread and drinking from the cup by way of remembrance that has the blessing of God upon it.

This type of activity, prevalent on a day like this, is always associated with apostate Christianity and especially with Romanism. It is not the mark of allegiance to the Scriptures for there is simply no such warrant!
Posted by Rev Brian McClung at Friday, March 29, 2013

Do you not agree with the literal interpretation of the Bible?

Luke 9:23 Then he said to them all: “Whoever wants to be my disciple must deny themselves and take up their cross daily and follow me"

This verse, and the two corresponding ones in the Gospels of Matthew and Mark, have nothing whatsoever to do with carrying a literal, physical cross. They speak about bearing reproach and suffering affliction for the cause of Christ. Themes which the New Testament are full of! Peter, for example, explains the true meaning of the words in 1 Peter 4:12-19.

If, as your comment implies, they were to be understood as referring to the carrying of a literal cross; then what do you make of the word 'daily' in Luke 9:23? Is that literal as well? After all these people only carry a cross once a year! This text requires us to carry the cross every day. It would be somewhat difficult to do anything profitable any day while literally carrying a cross around on your back.

There are metaphors in the Bible, such as when Christ said: I am the door; I am the bread of life, this is my body etc. The text you quoted must be a metaphor as I previously pointed out by highlighting the word 'daily'. If we are to take this literally, as you suggest, then it requires us to carry around a wooden cross on our back 'every' day of our lives and not just special days, like Good Friday.

India, Philipines, Austraila, Indonesia and Bob Jones University where live actors were hung from crosses in the latest living gallery production where life imitates art. Where is the scrutiny?

Can you give some further details of what you referring to?

Each year since the late 90s BJU has done a program called the Living Gallery. In this program live actors recreate one of the paintings from the art gallery. One year a friend of mine was Christ and he was hung from a cross. This is typical since much of the art in the gallery depicts pictures of Christ. Students who refuse to attend based on their conscience are given 50 demerits. To me this is way over the line. I was just perplexed as to how everyone gets so much scrutiny yet they seem to avoid it. Most decent conservative Reformed folk in the states are very much against pictures of Christ believing they break the 2nd commandment. Having actors portray Christ on a cross is really scary. Here is the link: http://livinggallery.bju.edu/performances.php

Thanks for the reply.

I would wholly share those concerns about 'holy pictures, icons etc' and the breaking of the second commandment. It has been a long standing opinion among Reformed believers that this type of activity breaks the 2nd commandment. I would be seriously uncomfortable with those pictures of Christ never mind someone portraying Christ on a cross. I don't see any difference between that and what we often protest against over here with Jesus Christ Superstar. I have mentioned some of these issues when preaching against Jesus Christ Superstar - http://www.sermonaudio.com/sermoninfo.asp?SID=11711434551