Free Presbyterian Outreach at the Olympics

The Irish Times has a report on the Free Presbyterian outreach at the Olympics.

FREE PRESBYTERIAN Church minister Stephen Pollock led his group in song on Saturday afternoon near the steps leading into the Westfield Centre and the Olympic Park beyond, but it was a struggle to be heard.

The Free Presbyterians was one of a multitude of religious groups competing for attention as Olympic spectators came and went on an afternoon: “But we’re lucky, we have a group that can sing, really sing,” said Rev Pollock.

“We’ve had absolutely no hostility at all,” he said, when asked how they had got on. “People have taken our literature. We brought about 5,000 pieces that speak about the Lord saving souls and they’ve all gone,” said the Omagh-based minister. 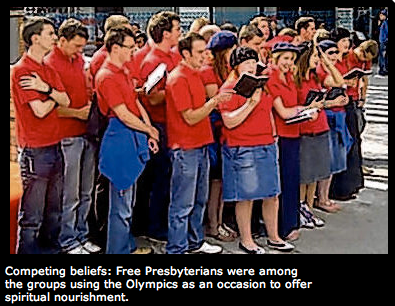