The Reformation Heritage KJV Study Bible Map Section endorses the liberal interpretation of the Exodus, with no crossing of the Red Sea 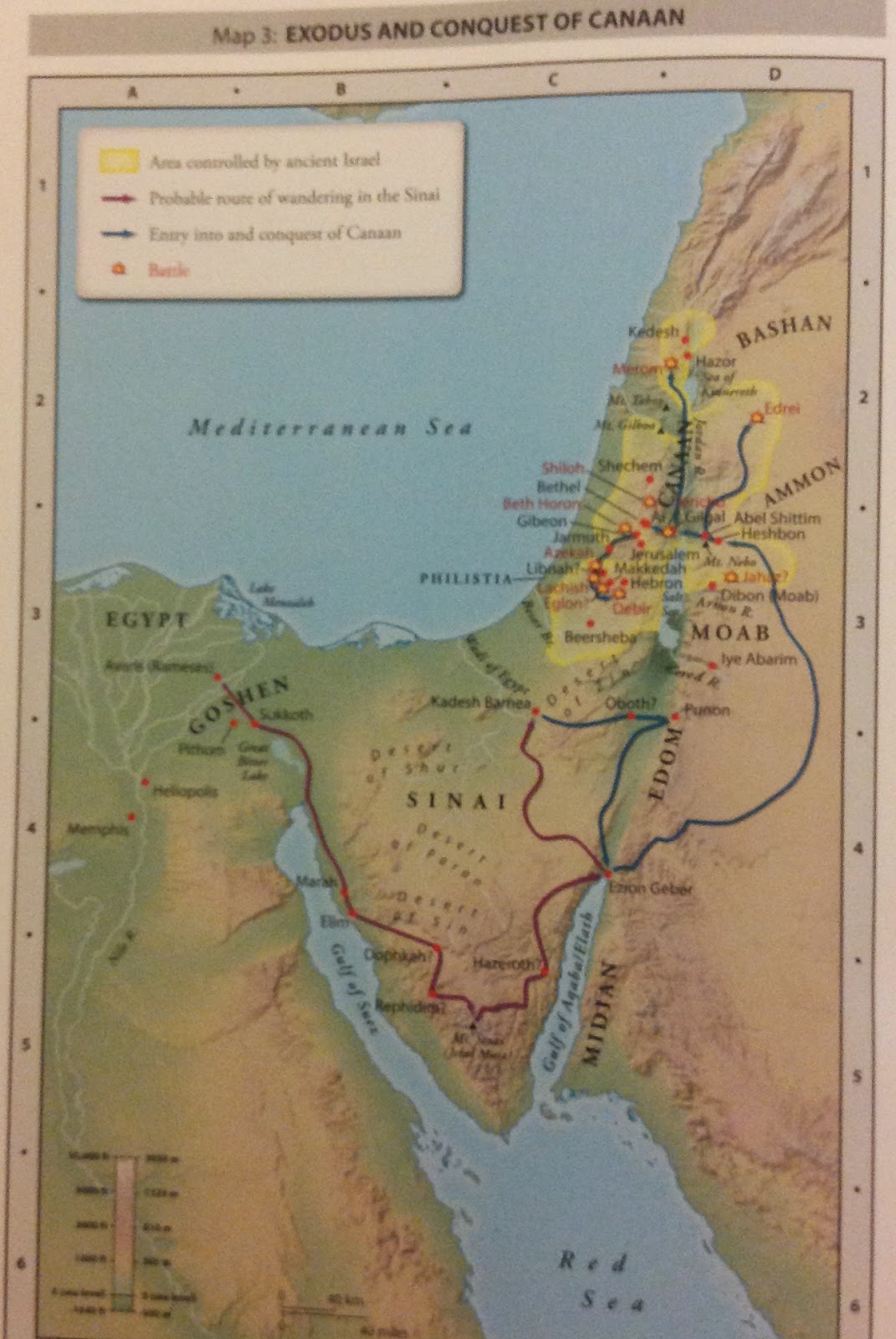 Great care ever needs to be taken, by Bible believing Christians, with respect to which Bible maps and atlases they employ or purchase. No where is that care more necessary than employing, or purchasing, maps which show the crossing of the Red Sea by the Israelites, when they came out of Egypt, on the night of the Passover.

Sadly, it has long been the case that most of the Bible maps and atlases in circulation today give credence to a liberal interpretation of the supernatural details of the Bible. One subsequent assertion is that the Israelites didn't really cross the Red Sea when they came out of Egypt.

Simple Test
When purchasing a new Bible, if it contains any maps, or if I am looking to purchase a Bible atlas, this is one of the first places I turn up to see what sort of map the publishers have included for Israel's journey out of Egypt and across the Red Sea to Mount Sinai. I have long thought that to be a basic, elementary point to check out when purchasing a Bible with maps or buying a Bible atlas!

I have to admit that I subsequently tend to judge the worth of the rest of any publication by the type of map it includes for the crossing of the Red Sea. Does it subscribe to the orthodox, conservative, evangelical position and show Israel really and truly crossing the Red Sea? Or does it subscribe to the liberal, compromising position and include a map which does not? In my mind the type of map included with respect to this issue indicates a particular mindset for the whole publication. If publishers can't get this important issue right in a Bible or atlas, what else are they wrong on in the rest of the publication? 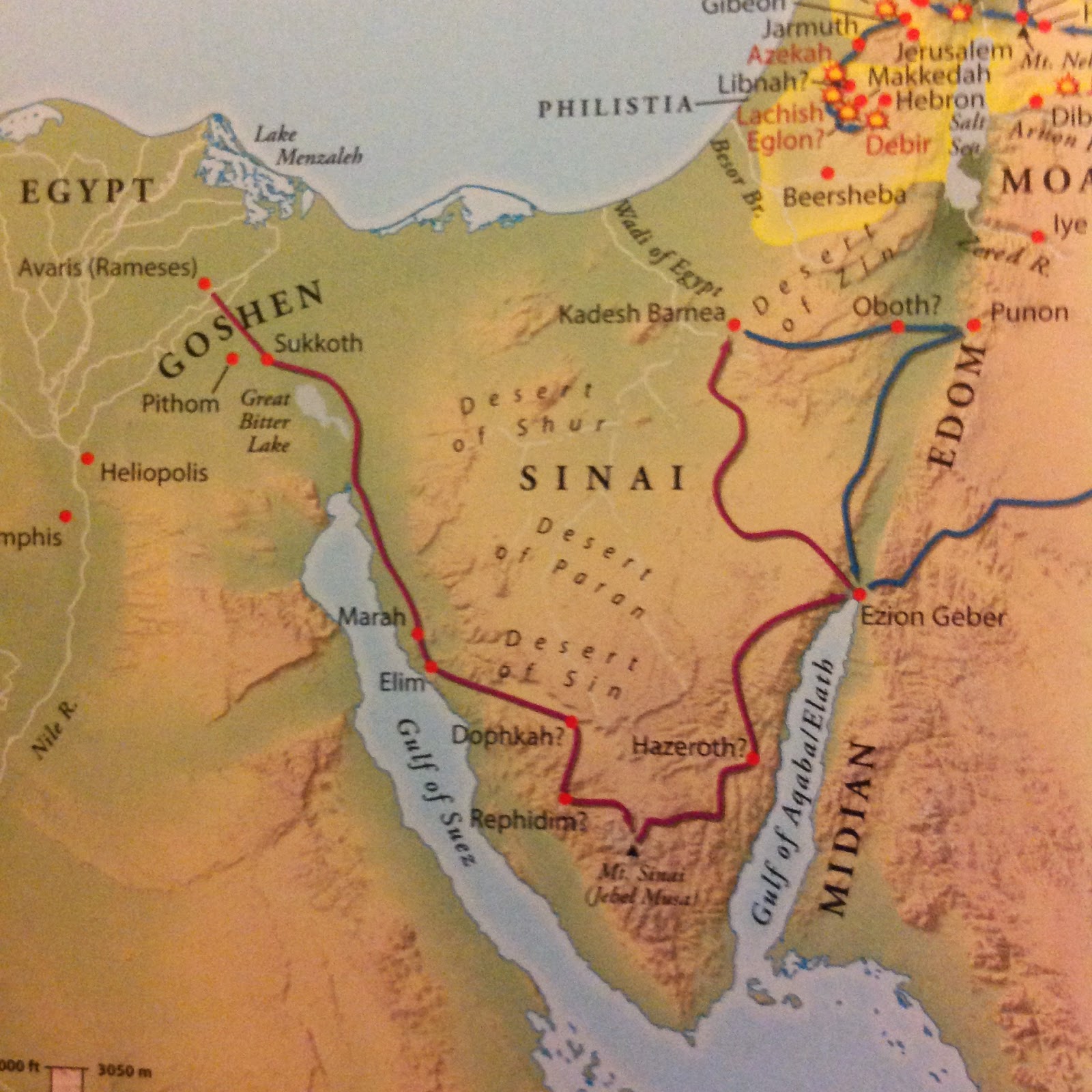 When instinctively doing this basic test on 'The Reformation Heritage KJV Study Bible' I discovered that it contained a map, which is in line with the liberal interpretation of Scripture.

This is another most unfortunate inclusion, in The Reformation Heritage KJV Study Bible!

That this Study Bible, of all Study Bibles, should include a map detailing Israel's 'Exodus out of Egypt', which doesn't show Israel crossing the Red Sea is hard to fathom. After all, it is supposed to have been put together by Reformed experts!

Well, if we take the editors, of the Study Bible, at their word, then we must visualise Israel never crossing the Red Sea at all. We must visualise an Exodus from Egypt that doesn't include one of the most significant miracles found in the Old Testament.

Repeatedly in the Old Testament we find God taking Israel back to the events of the Red Sea and reminding them of His mighty power. This is the greatest miracle in the Old Testament! Yet in visualising this event in this Study Bible, it never happened. This is alarming!!!!! 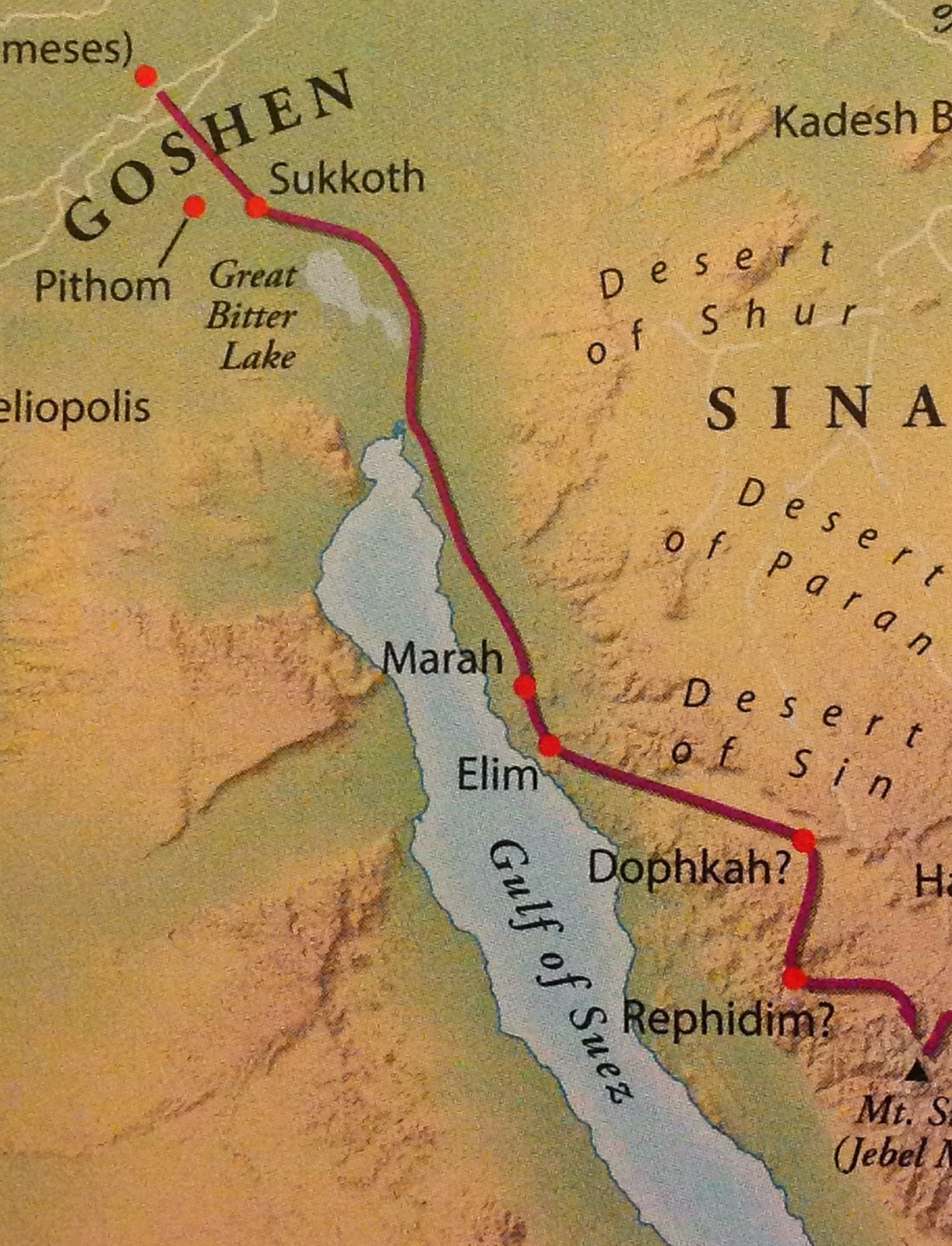 Bible maps and atlases have long been notorious for getting this vital issue wrong. This liberal mapping of the Exodus is very common and all too prevalent. Sadly, it is the standard practice for the vast majority of modern Bibles and Bible atlases.

Therefore, did anyone consider this map's suitability before it was inserted and endorsed by those involved in the production of this 'Reformation Heritage KJV Study Bible'?

Surely you would expect editors and publishers, of a Bible, that claims to be Reformed and orthodox, in its interpretation of Scripture, to make sure that the one Bible map which is so controversial would be checked for accuracy. It would surely be expected that this is something to look out for in editing any Study Bible. A basic and necessary task you would think!

It surely begs a few questions! Who originally compiled this map? Who decided to include it in the Study Bible? Did the editors miss this or did they decide to leave it in? Are they happy with its inclusion? Will it be removed in future editions?

Stranger still
Strangely, the map, in 'The Reformation Heritage KJV Study Bible', doesn't show Israel crossing any part of the Red Sea at all! The map plots the journey out of Egypt with a reddish line. However, nowhere does it seem that the journey took Israel through water of any sort, never mind through the depths of the Red Sea. Bad enough not to show the Israelites going through the Red Sea as we know it; worse still to show an Exodus with no crossing of any water at all.

This is the worst of all maps that could be included in any Bible for the Exodus, never mind 'The  Reformation Heritage KJV Study Bible'. The inclusion of this map is again seriously disappointing at best. Especially when this is a known point of long debate between orthodox and liberal theologians. Surely editors could have been expected to get such an important issue right? Especially when this type of corrupt mapping is so common place in Bible maps and atlases.

Easily Proven
It is easily proven that the Israelites didn't go through a marshy, reed swamp in a northern lake. One Bible reference will suffice. In 1 Kings 9:26-29 we read of Solomon's navy: And king Solomon made a navy of ships in Eziongeber, which is beside Eloth, on the shore of the Red sea, in the land of Edom. And Hiram sent in the navy his servants, shipmen that had knowledge of the sea, with the servants of Solomon. And they came to Ophir, and fetched from thence gold, four hundred and twenty talents, and brought it to king Solomon.

This navy was made up of, among others, servants of Hiram who were "shipmen that had knowledge of the sea". These men would not have been needed if the Red Sea in question was a marshy swamp, and Solomon's navy were going to sail around the shores of a smallish lake. Rather, these ships were to be launched out into the salt water of the Red Sea and navigate out into the Persian Gulf and the Arabian Sea, going as far away as Ophir, and bringing Solomon back great riches.

What's the Agenda?
These issues make you wonder whether someone is working to another agenda in this Study Bible. Thus far we have anti-Protestant notes that suggest Peter is the rock upon which the Church is built; we have a footnote that, as it presently stands, teaches the Roman Catholic doctrine of Justification and now we have a map that endorses the liberal interpretation of the Exodus. Could it get any worse?

And still there is more …
Posted by Rev Brian McClung at Thursday, April 02, 2015

Thank you for your good work in exposing the very serious deficiencies of the Beeke bible. I pray that those involved in its production and promotion will have cause to repent of their associations.

Thank you for exposing the errors in the footnotes of the Beeke bible.
Proverbs ch 3 verse13
June FlemingJun