The wretchedness of our system of Government

If anything displays the utter wretchedness of the immoral system of government that is in place in this Province it is the news today that Mary McArdle who was part of the IRA gang who ambushed Magistrate Tom Travers and his family as they left Mass in south Belfast in April 1984 and killed his 22 year old daughter has become a special advisor to the new Culture minister.

In one way it is hardly surprising when it is remembered that the Culture minister herself is a convicted terrorist. A system that rewards terrorists with early release and elevates them to rule over the innocent who they have terrorised in nothing short of being a wicked system of government.

Anyone who props up this wicked system of government must surely hang their head in shame.

It is worthwhile remembering what Romans 13:1-7 has to say about those who hold office in civil government:
Let every soul be subject unto the higher powers. For there is no power but of God: the powers that be are ordained of God.
Whosoever therefore resisteth the power, resisteth the ordinance of God: and they that resist shall receive to themselves damnation.
For rulers are not a terror to good works, but to the evil. Wilt thou then not be afraid of the power? do that which is good, and thou shalt have praise of the same:
For he is the minister of God to thee for good. But if thou do that which is evil, be afraid; for he beareth not the sword in vain: for he is the minister of God, a revenger to execute wrath upon him that doeth evil.
Wherefore ye must needs be subject, not only for wrath, but also for conscience sake.
For for this cause pay ye tribute also: for they are God’s ministers, attending continually upon this very thing.
Posted by Rev Brian McClung at Wednesday, May 25, 2011 No comments:

The 1967 Abortion Act came into effect on 27 April 1968. Since then, over seven million unborn children have been killed through registered abortion in Britain. This figure does not include abortions which may be caused by birth control drugs and devices. Nor does it include the number of embryos destroyed or discarded during and after in-vitro fertilisation (IVF). [Source - Society for the Protection of unborn children]

Here are some harrowing statistics from the Office of National Statistics for abortion in England & Wales since the Abortion Act was introduced. 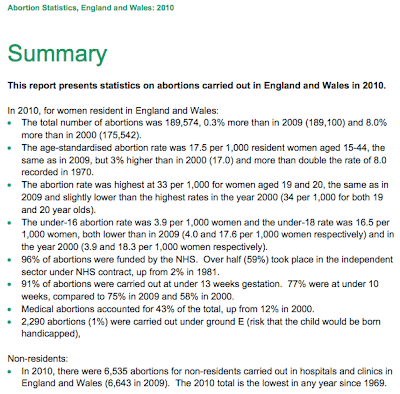 The overall trend in Abortion is upward: 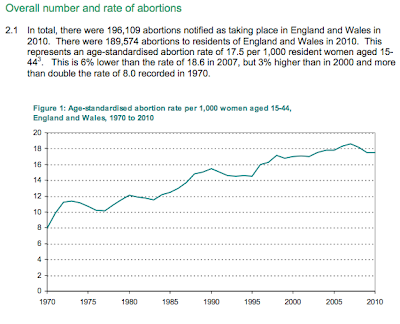 In relation to age the report says: 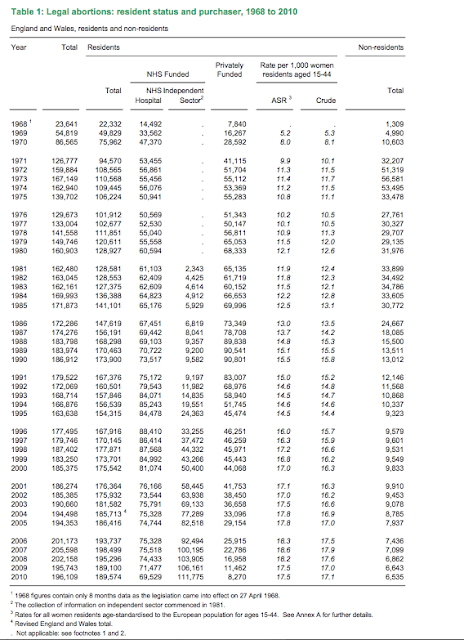 What does the Scriptures say about abortion? [Previous post on this blog]
Posted by Rev Brian McClung at Tuesday, May 24, 2011 2 comments:

Deputy First Minister to be questioned about murder [Fancy that!!]

The Belfast Newsletter reported on Friday that the Historical Enquiries Team is about to question the Deputy First Minister about the murder of 29-year-old census worker Joanne Mathers in 1981.

Martin McGuinness, who has openly stated that he is 'proud' to have been in the IRA, was the IRA’s commander in the city of Londonderry during much of the Troubles.

Up until now IRA/SinnFein have refused to co-operate with the Historical Inquiries Team. So much for their new supposed recognition and support of policing and justice that was peddled as the excuse for appointing McGuinness as Deputy First Minister in the first place! In 1998 when David Trimble sought to share power with Martin McGuinness his terrorist past was said have made him unsuitable to hold any post in government never mind that of Deputy First Minister. 'Unscriptural, unethical and immoral' were the terms employed.

This report in the Newsletter is once again a reminder of McGuinness' past and proof that those words were very accurate.

The likelihood of McGuinness being called to account by the HET for his past is nil. However, although Martin McGuinness may escape the censure of any earthly court, there is one Judge and a coming day in which every murderer and supporter of murder will be called upon to answer for their deeds. The hidden things of darkness will then be brought to light.

The shedding of innocent blood is specifically said to be one of the seven things that God hates: Proverbs 6:16,17 These six things doth the LORD hate: yea, seven are an abomination unto him:
A proud look, a lying tongue, and hands that shed innocent blood…

The God of heaven will not be as easily deceived about McGuinness and his past, as multitudes in this Province have!
Posted by Rev Brian McClung at Monday, May 23, 2011 12 comments:

Rapture to take place this Saturday!!

According to Harold Camping the rapture will take place on Saturday 21st May at around 6 pm.

To read more see here:
Belfast Telegraph - World will end this Saturday, May 21, warns preacher Camping
The Independent - US preacher warns end of the world is nigh: 21 May, around 6pm, to be precise

It doesn't take a great deal of Bible knowledge to see the folly of such claims. As sure as anyone sets a date or time for the rapture you can be sure it is wrong. So says the Word of God:
Matthew 24:36 But of that day and hour knoweth no man, no, not the angels of heaven, but my Father only.
Earthquakes etc are not a sign of the end. It never says this in the Bible anywhere. There have always been earthquakes etc in the world and they will continue. We are not to mistake their occurrence for end time events:
Matthew 24:5-8, For many shall come in my name, saying, I am Christ; and shall deceive many.
And ye shall hear of wars and rumours of wars: see that ye be not troubled: for all these things must come to pass, but the end is not yet.
For nation shall rise against nation, and kingdom against kingdom: and there shall be famines, and pestilences, and earthquakes, in divers places. All these are the beginning of sorrows.
As pointed out in these reports Harold Camping has 'form' on this. He announced that the world would end in September 1994. It didn't happen!
There is no rapture taught in the Bible, never mind a rapture on saturday 21st May 2011!
Worthwhile related articles to read are:
1. Reasons Why the Great Tribulation Must Precede the Church's Translation by Pastor J. Kyle Paisley
2. Why the Revelation of the Anti-Christ and the Apostasy must Precede the Coming of the Lord by Pastor J. Kyle Paisley
Posted by Rev Brian McClung at Thursday, May 19, 2011 1 comment:

The Daily Mail is reporting that Archbishop Vincent Nichols, the head of the Catholic church in England and Wales is telling the 'faithful' not to eat meat on Fridays:
The custom of abstaining from meat as an act of penance for the death of Christ will be re-established from September 16 - the first anniversary of Pope Benedict's visit to Britain.

Archbishop Vincent Nichols, the head of the Catholic Church in England and Wales, said the decision to reintroduce the practice was taken at least partly as a result of the papal visit, which had created ‘a fresh expression of self-confidence and identity amongst Catholics’.

Read the full report here
Paul warned Timothy about those who commanded such things:
1 Timothy 4:1-9
Now the Spirit speaketh expressly, that in the latter times some shall depart from the faith, giving heed to seducing spirits, and doctrines of devils;
Speaking lies in hypocrisy; having their conscience seared with a hot iron; Forbidding to marry, and commanding to abstain from meats, which God hath created to be received with thanksgiving of them which believe and know the truth.
For every creature of God is good, and nothing to be refused, if it be received with thanksgiving:
For it is sanctified by the word of God and prayer.
If thou put the brethren in remembrance of these things, thou shalt be a good minister of Jesus Christ, nourished up in the words of faith and of good doctrine, whereunto thou hast attained. But refuse profane and old wives’ fables, and exercise thyself rather unto godliness.
For bodily exercise profiteth little: but godliness is profitable unto all things, having promise of the life that now is, and of that which is to come.
This is a faithful saying and worthy of all acceptation.
According to the Apostle Paul, these acts of penance, as taught by Romanism, do not exercise the soul to godliness!
Posted by Rev Brian McClung at Friday, May 13, 2011 2 comments:

A questionnaire was sent out to all the Assembly candidates seeking their views on a range of scriptural, moral and ethical subjects by three organisations representing evangelical Christians here in Northern Ireland: The Caleb Foundation, Evangelical Protestant Society & Day One - Lord's day Observance Society.

Thirty-eight out of over two hundred candidates replied. Their replies can be viewed online at MLA Watch - Christians asking questions. It makes interesting reading! 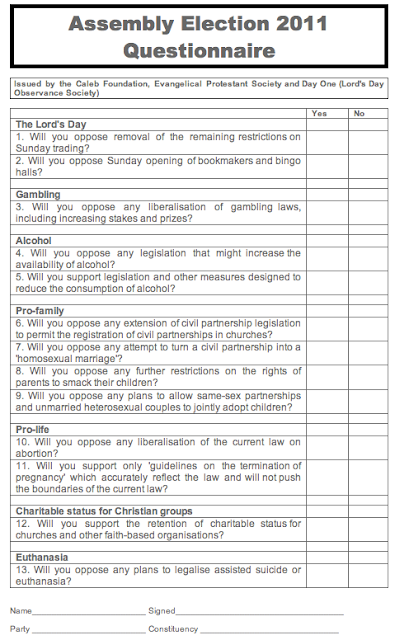 Here is a breakdown of pageviews for the blog for the month of April. 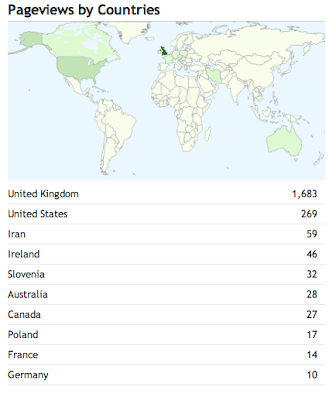