Click on graphic above to read letter in the Belfast Newsletter
Posted by Rev Brian McClung at Saturday, August 12, 2017 No comments:

Police Service of Northern Ireland abandons all semblance of impartiality by joining the sodomite parade in Belfast, thereby loses respect 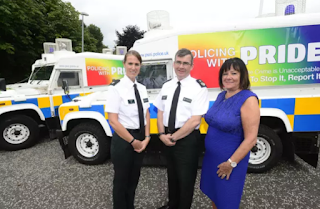 In total around forty uniformed officers from Northern Ireland, the Republic of Ireland and other UK police forces joined the march through the centre of Belfast.

Criticism
The PSNI has rightly come under criticism for allowing its officers to join the parade. This is especially so when the the organisers of this pride parade are seeking to overturn the laws against gay marriage in Northern Ireland. The PSNI are seen to be taking sides and refusing to remain neutral on this contentious issue.
Read more »
Posted by Rev Brian McClung at Thursday, August 10, 2017 No comments:

Rev Ivan Foster answers woman who wrote to the Newsletter defending her sodomite sons. Click on the graphic above to link to the article.
Posted by Rev Brian McClung at Thursday, August 10, 2017 No comments:

Sodomite Politicians use their positions to advance their personal views

Just imagine if this was a professing, evangelical, born-again Christian who openly stated that they would use their political position to promote and advance their personal, biblical views on sodomy and gay marriage.

There would be an outcry from the liberal media. Reporters and commentators would be indulging in outrage that such a thing was allowable in this permissive age. News bulletins would be leading on the story. Radio phones-ins would be running the story ad nauseam. Grieved and outraged members of the sodomite community would be wheeled out to tell all and sundry how offended and deeply hurt they are by such an outrageous abuse of position being allowed to take place. Social media would be aghast that such a thing was countenanced. All would be demanding that something be done about it.

There would be high pitched demands that such a person, who would use their political position to promote their personal, biblical views, should be sacked and removed immediately from their position.


Hypocritical silence
No such outcry, however, follows such an announcement from pro-sodomy and pro-gay marriage politicians. Hypocritically there is silence. Not a squeak is heard from any media outlet about this abuse of position.  Even worst, tacit approval and support is given to those who openly state that they will use their political positions to promote and advance their personal views on these moral issues such as sodomy and gay marriage.

Two glaring examples of this two-faced hypocrisy have been evident over the summer so far.

Protest at Sodomite parade in Belfast 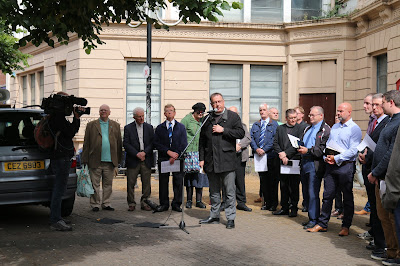 Further pandering to the Sodomites

It has been reported that PSNI officers will take part in the Belfast Pride Parade. This is supposedly to stamp out hate crime against members of the LGBT community in the Province.

This is simply an exercise in pandering to a vociferous lobby group.

The Chief Constable of the PSNI has been urged to ‘step in’ over uniformed officers taking part in Gay Pride parade by Mr Jim Allister.

Click here to see the report in the Belfast Newsletter

Posted by Rev Brian McClung at Wednesday, August 02, 2017 No comments:

Abortion - 100,000 children alive in Northern Ireland today due to restrictions on abortion. 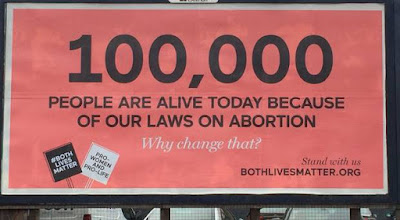 Fourteen complaints had been made against the claim alleging that it could not be substantiated. However, the Advertising Standards Authority (ASA) has dismissed the complaints stating that the assertion was not misleading and there was a "reasonable probability" it was largely accurate.

A Pro-life lobby group called Both Lives Matter (BLM) had run the billboard campaign. BLM, while acknowledging that it was not possible to calculate an exact figure, claimed that 100,000 represented a credible and conservative estimate. This calculation was based on a comparison with Scotland's abortion ratio. 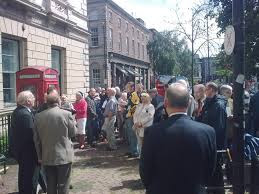 This is the summary of a sermon preached some years ago in Newtownabbey FPC as part of a series on Free Presbyterian distinctives.

The marks of a Scriptural Church - Wearing a Head Covering
To be a Scriptural Church there is a need for all females to wear a headcovering. Paul in writing to young Timothy exhorted him to hold fast the form of sound words given to him. Timothy was charged to be faithful to the precepts of the Word of God in a day when it was difficult to do so. Paul warned him that the time would come when many would not endure sound doctrine and that many would turn away from the truth, deceiving and being deceived. If anything marks the age in which we live it is these features with respect to the issue of Headcovering.


There has been a serious turning away from the Word of God on the issue of females wearing a head covering in public worship. There is most certainly a failure to hold fast to the form of sound words on this vital matter as taught in the holy Scriptures.

Churches that believe it is right that women cover their heads in public worship are laughed at and ridiculed. We are denounced as being petty and narrow minded. There are those who argue that this precept only applied to Corinth and was a local custom in order to excuse their non-observance of this practice.

There are those abroad today who once held to this but who do not do so any longer. They argue that it hinders people coming into the services. There have been churches which once kept 'hats' to give people who arrived at church without them but have now changed and are preaching against the wearing of a head covering.

What Do The Times Require?

This article is by J C Ryle. It is an extract from the chapter “Wants of the times” in his book entitled ‘Holiness'. It is worth reading keeping in mind that this is the 500th anniversary year for the Protestant Reformation

The times require of us an awakened and livelier sense of the unscriptural and soul-ruining character of Romanism.

This is a painful subject: but it imperatively demands some plain speaking.

The FACTS of the case are very simple. No intelligent observer can fail to see that the tone of public feeling in England about Romanism has undergone a great change in the last forty years. Father Oakley, the well-known pervert, an ally of Cardinal Newman, asserts this triumphantly in the last number of the Contemporary Review. And I am sorry to say that, in my judgment, he speaks the truth. There is no longer that general dislike, dread, and aversion to Popery, which was once almost universal in this realm. The edge of the old British feeling about Protestantism seems blunted and dull. Some profess to be tired of all religious controversy, and are ready to sacrifice God's truth for the sake of peace.—Some look on Romanism as simply one among many English forms of religion, and neither worse nor better than others.—Some try to persuade us that Romanism is changed, and not nearly so bad as it used to be.—Some boldly point to the faults of Protestants, and loudly cry that Romanists are quite as good as ourselves.—Some think it fine and liberal to maintain that we have no right to think any one wrong who is in earnest about his creed. —And yet the two great historical facts, (a) that ignorance, immorality, and superstition reigned supreme in England four hundred years ago under Popery, (b) that the Reformation was the greatest blessing God ever gave to this land,—both these are facts which no one but a Papist ever thought of disputing fifty years ago! In the present day, alas, it is convenient and fashionable to forget them! In short, at the rate we are going, I shall not be surprised if it is soon proposed to repeal the Act of Settlement, and to allow the Crown of England to be worn by a Papist.