Reformation Heritage KJV Study Bible employs a 'somewhat vague' and 'confusing' definition of the doctrine of 'Regeneration'. Why? 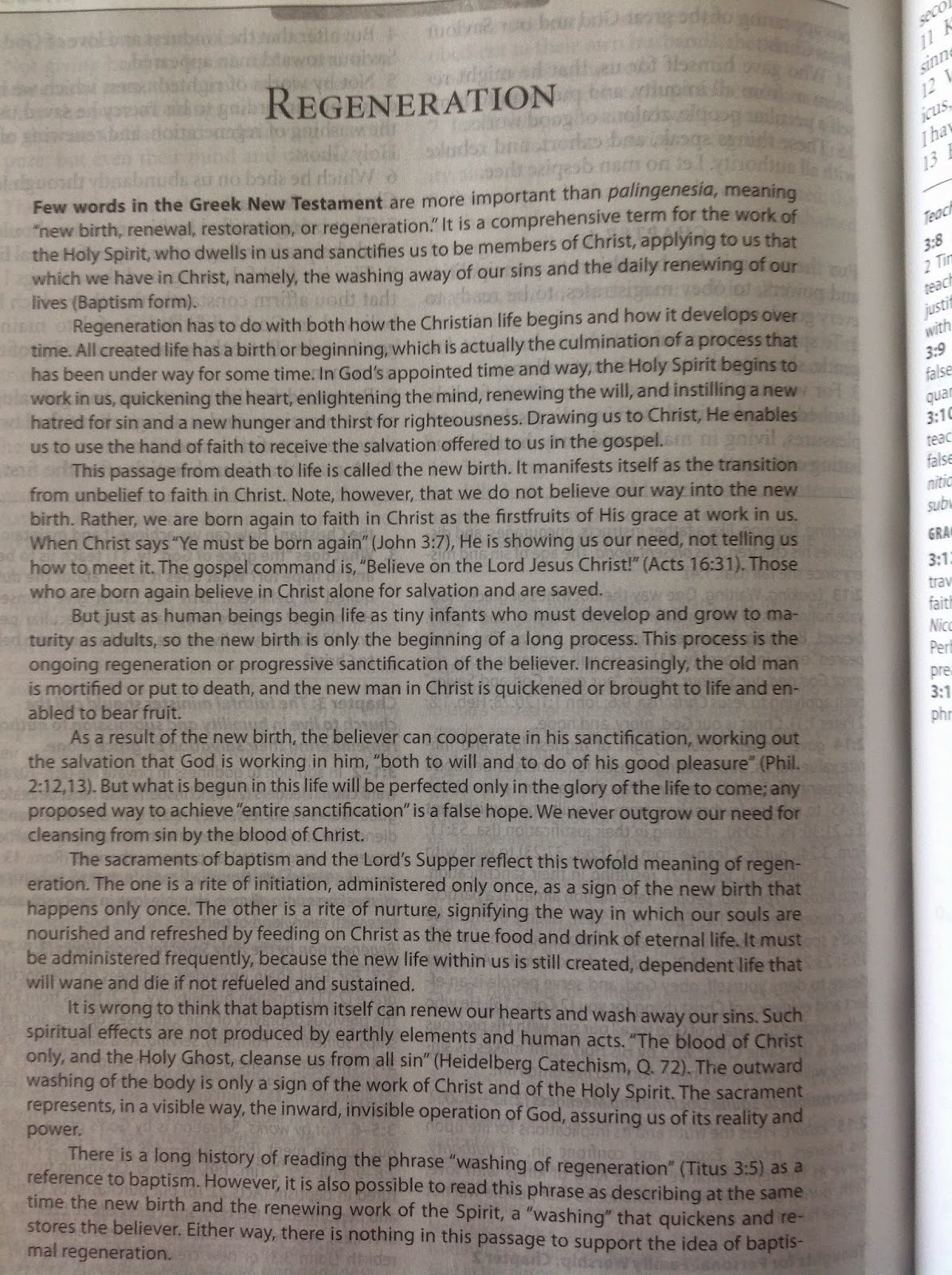 In 'The Reformation Heritage KJV Study Bible' there is a full page article given over to an explanation of the important doctrine of 'Regeneration'.

This full page article appears on page 1,774 of the Study Bible, in connection with the occurrence of the word 'regeneration' in Titus 3:5. This word translated 'regeneration' only appears twice in all the New Testament, and only in Titus 3:5 does it refer to the subject of individual salvation. The other place the word appears is Matthew 19:28, where it is used with respect to the coming restitution of all things.

The definition employed, by whoever wrote this article for the Study Bible, reverts back to an older definition that is not normally employed today in Reformed circles to describe the important doctrine of 'Regeneration'. A definition that was employed before the Order of Salvation was fully developed.

There are three ways in which the term 'Regeneration' can be understood:
1. The Narrow Sense, where it is equated with Effectual Calling and the New Birth. This is how the term is mostly employed today. It is certainly the way the term is used when speaking about the Ordo Salutis/Order of Salvation. The usual order is: Regeneration/Effectual Calling, Conversion, Justification, Adoption, Sanctification, Perseverance and Glorification.

2. The Wider Sense, where it was used to describe the wider application of redemption. For example, John Calvin employed the term to cover the application of redemption from the New Birth through to Sanctification: I apprehend repentance to be regeneration, the end of which is the restoration of the divine image within us. In this regeneration, we are restored by the grace of Christ to the righteousness of God from which we fell in Adam. And this restoration is not accomplished in a single moment, or day, or year; but by continual even tardy advances the Lord destroys the carnal corruptions of the elect, Institutes 3:3.9.

William G. T. Shedd is his theological work states that: This wide use of the term passed into English theology. The divines of the seventeenth century very generally do not distinguish between regeneration and conversion, but employ the two as synonyms. Owen does this continually (On the Spirit 3.5), and Charnock likewise (Attributes, Practical Atheism).

'The Westminster Confession of Faith' and 'The Canons of Dort' employ the term in this wider, comprehensive sense. 'The Belgic Confession' uses the term in an even wider sense, see Article XXIV.

3. The Fullest Sense, where the word 'Regeneration' is used in the Scriptures to refer to that future restoration and regeneration of all things that will take place when the Saviour returns, cf. Matthew 19:28.


Reformation Heritage Study Bible Definition
The definition in the Study Bible seeks to align itself with the second of these definitions, in which the term is used in the wider sense. The term 'Regeneration' is used to describe the application of redemption from Effectual Calling/New Birth all the way through to Glorification.

However, the use of the term 'Regeneration' in this wider sense has been described by Reformed Theology in recent generations as 'somewhat vague', and 'confusing'.

Louis Berkhof stated something similar in his Systematic Theology: This comprehensive use of the term "regeneration" often led to confusion and to the disregard of very necessary distinctions. For instance, while regeneration and conversion were identified, regeneration was yet declared to be monergistic, in spite of the fact that in conversion man certainly co-operates. The distinction between regeneration and justification had already become clearer, but it gradually became necessary and customary also to employ the term “regeneration” in a more restricted sense.

It is understandable that Calvin, the English Puritans, the Westminster Confession of Faith, The Canons of Dort and The Belgic Confession would use the wider sense of meaning for the term Regeneration. After all, the concept of the Ordo Salutis/Order of Salvation was not fully developed in their day. The term 'Ordo Salutis' wasn't first used until the 18th century.

But why would a definition of 'Regeneration' that has been described as somewhat vague and confusing, by these theological stalwarts, be employed today in 'The Reformation Heritage KJV Study Bible'? The concept of the Ordo Salutis/Order of Salvation has been fully developed for many generations. Most, if not all, Reformed Theological Colleges and Seminaries teach, and employ, this narrower definition of the term 'Regeneration', while acknowledging the existence of the wider sense.

In the 'Acknowledgments' section, of 'The Reformation Heritage KJV Study Bible', on page 2,217, mention is made of the: dozens of contributors who have written other articles throughout this study Bible, both interspersed within the text and in the Christian living section. It would be interesting to know who are these dozens of contributors? Which articles did they write? Did one of these unnamed contributors write this article on Regeneration?

Examples of the type of confusion that can result:
1. This wider definition fails to mark the distinction between regeneration, in which God alone acts, and conversion, in which the human will works. Regeneration, in the narrow sense of the term, is an instantaneous act of God. This wider definition, used in the Study Bible, fails to convey that. Rather the thought of a 'process' is very much to the fore, with a statement such as: This passage from death to life is called the new birth. It [ie. the new birth] manifests itself as the transition from unbelief to faith in Christ. You would be hard pushed to discern from these words that the new birth is an instantaneous act of God.

2. The definition also states: Regeneration has to do with both how the Christian life begins and how it develops over time. All created life has a birth or beginning, which is actually the culmination of a process that has been under way for some time. If Effectual Calling/New Birth is the first rung on the Regeneration/Ordo Salutis/Order of Salvation ladder, what is this process that culminates in the New Birth? It can't be the external call of the Gospel, or conviction of sin, for the non-elect partake of these also to a degree, but never experience the New Birth or any of the other blessings of redemption. The New Birth is the starting point for the application of redemption.

3. The definition also reads: … the new life within us is still created, dependent life that will wane and die if not refueled and sustained. [Emphasis mine] This type of terminology and expression is concerning at best. In what way can the life created by the instantaneous, sovereign act of God, in what is known as the New Birth, wane and die? Is the new life, created by the New Birth, dependent upon the new born believer continuing to attend the Lord's Table? See context of article.

4. Any definition of 'Regeneration' that has to contain a disclaimer, at its close, that it isn't teaching baptismal regeneration, is surely an example of the confusion that can result in the indiscriminate use of this term.


The 'Why?' Possibly Answered
One suggested explanation for the use of this somewhat vague and confusing, wider definition of 'Regeneration', is that it is more accommodating to the view held, by some in the Reformed camp, concerning the presumptive regeneration of covenant children. Those who hold this particular view believe that regeneration/ conversion in their children is to be viewed as a progressive thing rather than instantaneous. It has been claimed that believers' children grow into conversion. There are those in the Reformed camp who believe that the Ordo Salutis/Order of Salvation is more suited to adult salvation than it is for children. The terminology used in this definition of 'Regeneration' certainly lends itself to that mode of thinking.
Posted by Rev Brian McClung at Friday, April 17, 2015

So what you are effectively saying is that this move back to the "wider sense" in the KJV RHSB is a subtle (or perhaps not so subtle?)move back to Popery?
Calvin was a Reformer, but previously an RC priest so some of his teachings must have still not been "fully developed" as you say?
Somewhere in Calvin's institutes (so I believe) there is a teaching that children that are born to believers and baptised are saved?

I don't think I mentioned the word "popery" in the whole article.

If you read about the history of the the Order of Salvation you will find that my comment about it not being fully developed is suggested/taught by others.