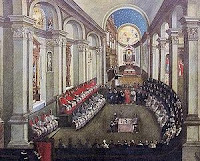 Its purpose was to reaffirm Catholic teaching. In doing so the Council of Trent issued condemnations of what it defined to be ‘heresies’ committed by Protestantism. In addition key statements and clarifications were issued stating the Church's position on various doctrines including that of Scripture, the Canon of Scripture, Sacred Tradition, Original Sin, Justification, Salvation, The Sacraments, The Mass and the Veneration of Saints.

As a reaction to the teaching of Martin Luther, and others, the Catholic Church decided that it needed to clarify its own doctrinal beliefs. Roman Church officials and theologians met in the Italian city of Trento. The Council met for twenty-five sessions between 13th December 1545 and 4th December 1563. It sat during the reign of three popes. Pope Paul III, [pictured] who convoked the Council, presided over the first eight sessions (1545–47), Pope Julius III overseen sessions twelve to sixteen (1551–52) and Pope Pius IV was in the papal chair covering the seventeenth to twenty-fifth sessions (1562–63).

The Council of Trent had two main objectives, namely the condemnation of the principles and doctrines of Protestantism and the clarification of the doctrines and practices of the Romish Church on all disputed points. 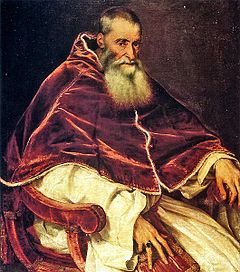 Minor adjustments
The Council agreed to make some minor adjustments to Romish practices. They decided to curb the sale of indulgences and forbid the clergy to offer anymore Indulgences. In addition, some priests who were deemed guilty of abusing their position. politically, economically, socially, and morally, were reprimanded.

Minor changes were all that came from this gathering at Trent. What else could be expected from a church that claims it has an infallible pope at its head. Otherwise the Council of Trent stuck to its guns on all substantive issues.

The Council repudiated specific Protestant positions and upheld the basic structure of the Romish Church, its sacramental system, religious orders, and doctrine. It rejected all the teachings of the Reformers, upholding the dogma of salvation appropriated by faith and works. Transubstantiation, which holds that the consecrated bread and wine becomes the body and blood of Christ, was upheld, along with the Seven Sacraments. Other Romish practices such as indulgences, pilgrimages, the veneration of saints and relics, and the veneration of the Virgin Mary, were all strongly reaffirmed as being vital for the spiritual wellbeing of the faithful.

In reaffirming that the ceremonies and rituals of the Church were vital and significant the Council reaffirmed the need for priests. Many priests in the rural parishes were poorly educated and cared little for the people over whom they ministered. Often, these rural priests did not know Latin and lacked proper theological training. As a result of the Council of Trent a greater effort was made to educate these priests. Handbooks were complied describing how to be good priests and confessors.

The Romish also sought to move away from the impression that the Church was a political entity, just like one of the city states of Italy at the time. The Church was seen as being obsessed with obtaining wealth and exercising political influence in the affairs of Europe at the cost of any spiritual influence. For example, the appointment of bishops for political reasons was no longer tolerated. “Absent bishops" were no longer deemed acceptable. Many bishops had been living in Roman or on landed estates rather than in their dioceses.


Decrees and canons
The doctrinal decisions of the Council are divided into decrees, which contain the positive statement of Romish dogma, and into short canons which condemned the views of the Protestant Reformers. These canons concluded with an "anathema sit” (let him be anathema”) pronouncement, invoking the judgment of God upon those who disagreed with the Church’s teaching.

The Table below shows the doctrinal subjects covered and the canons and decrees issued. 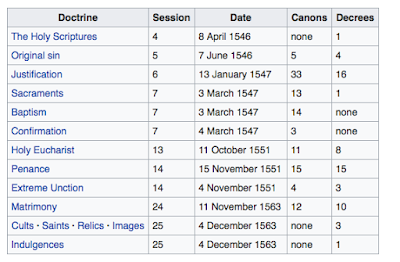 Canon 9: If any one saith, that by faith alone the impious is justified; in such wise as to mean, that nothing else is required to co-operate in order to the obtaining the grace of Justification, and that it is not in any way necessary, that he be prepared and disposed by the movement of his own will; let him be anathema.

Canon 12: If any one saith, that justifying faith is nothing else but confidence in the divine mercy which remits sins for Christ's sake; or, that this confidence alone is that whereby we are justified; let him be anathema.

Canon 14: If any one saith, that man is truly absolved from his sins and justified, because that he
assuredly believed himself absolved and justified; or, that no one is truly justified but he who believes himself justified; and that, by this faith alone, absolution and justification are effected; let him be anathema.

Canon 23: If any one saith, that a man once justified can sin no more, nor lose grace, and that therefore he that falls and sins was never truly justified; or, on the other hand, that he is able, during his whole life, to avoid all sins, even those that are venial, - except by a special privilege from God, as the Church holds in regard of the Blessed Virgin; let him be anathema.

Canon 24: If any one saith, that the justice received is not preserved and also increased before God through good works; but that the said works are merely the fruits and signs of Justification obtained, but not a cause of the increase thereof; let him be anathema.

Canon 30: If any one saith, that, after the grace of Justification has been received, to every penitent sinner the guilt is remitted, and the debt of eternal punishment is blotted out in such wise, that there remains not any debt of temporal punishment to be discharged either in this world, or in the next in Purgatory, before the entrance to the kingdom of heaven can be opened (to him); let him be anathema.

Canon 33: If any one saith, that, by the Catholic doctrine touching Justification, by this holy Synod inset forth in this present decree, the glory of God, or the merits of our Lord Jesus Christ are in any way derogated from, and not rather that the truth of our faith, and the glory in fine of God and of Jesus Christ are rendered (more) illustrious; let him be anathema.

Nothing much changed with the Council of Trent. Rome remained the same apostate church which had repudiated the truth of the Gospel as she was before the Council met. The Council only confirmed that the Reformers were correct in separating from this harlot system.
Posted by Rev Brian McClung at Wednesday, November 29, 2017