Compromising with murderers, and their supporters, has brought Unionism to its knees. More of the same is not the answer! 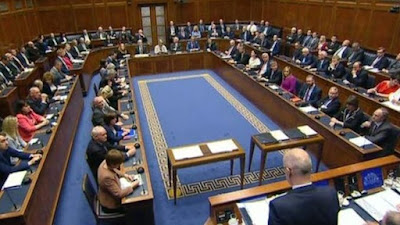 Samson thought he could play with sinful temptation and not suffer any consequences. He learned to his great cost that trifling with what is wrong brings a fearful harvest. Samson ended up blind, shackled, subjugated by the Philistines and grinding corn in their prisonhouse.

Jehoshaphat, king of Judah, joined in affinity both with ungodly Ahab and his son Ahaziah. Remember that Ahab's house was a murderous one. These were political ventures, which were thought would benefit and enrich their respective kingdoms with peace and prosperity. It wasn't that Jehoshaphat was joining in joint worship or anything that was overtly religious. It was a purely political, commercial union, designed to advance the peace and prosperity both of the northern and southern kingdoms in Israel.

Mistaken ventures
On the first occasion, when Jehoshaphat and Ahab determined to go to war against the Syrians, Jehoshaphat was wise enough to seek counsel from God. Micaiah the prophet counselled them to desist and go home. Micaiah spoke on God's behalf and said: I did see all Israel scattered upon the mountains, as sheep that have no shepherd: and the LORD said, These have no master; let them return therefore every man to his house in peace.

This mistaken venture into war ended with the untimely death of ungodly Ahab and Jehoshaphat only escaping death by the skin of his teeth. Upon his return home Jehoshaphat was again warned by God about his foolish and mistaken adventure. Evidently the spirit that caused him to join with Ahab had not been totally eradicated from his heart and mind. Jehu, the son of Hanani, the seer, went out to meet king Jehoshaphat upon his return and said to him: Shouldest thou help the ungodly, and love them that hate the LORD? therefore is wrath upon thee from before the LORD, 2 Chronicles 19:2.

Despite what happened before, and the warnings received, Jehoshaphat ventured forth again in political union, this time with king Ahaziah, Ahab's son. A fleet of ships were built at Ezion-geber, to sail over the seas to Tarshish and bring back wealth and material gain to the two kingdoms.

Again God made His mind known on this type of political union. This time it was Eliezer the son of Dodavah of Mareshah who prophesied against Jehoshaphat, saying: Because thou hast joined thyself with Ahaziah, the LORD hath broken thy works, 2 Chronicles 20:37. The ships were broken, that they were not able to go to Tarshish, Jehoshaphat made ships of Tharshish to go to Ophir for gold: but they went not; for the ships were broken at Eziongeber, 1 Kings 22:48.

It is broken so much that it thinks more of the same is the answer. There are those who fail to stand for moral issues, evidenced recently in the lack of opposition to the sodomite pardons passed by the Stormont Assembly. Some, who have since lost their seat, sneered at the idea of opposing such a thing and wanted to know whether adultery should also be made a criminal offence!

There are voices which call for more alliances and more compromise with the ungodly. They are doing exactly the same as Jehoshaphat did in Old Testament times. He did not learn his lesson and politically Unionism is not learning its lesson either.

Unionism is broken, much like the ships of Jehoshaphat and Ahaziah. Broken to the extent that the likes of Gerry Adams, and his fellow travellers, are gloating over its demise. Unionism is on its knees. Sadly, not on its knees in supplication to God for mercy and forgiveness. It is on its knees having been weakened and brought to this place by its compromise with evil.

Warning given
Warnings have been given since this mistaken course was chosen some years ago by David Trimble. It was unscriptural, unethical and immoral back then in 1998, in 2007 and it is still so now. God's opinion won't change to accommodate the political ambitions of politicians.

The Answer
The answer is certainly not to 'Do Nothing'. That is never God's answer, and it is not the answer for today. God's answer is 'Do Right'. It was Dr Bob Jones, Sr. who often said: Do right though the stars fall.

Unionism too needs to Do Right! It needs to Do Right and look to God to bring deliverance. If that does not happen then Unionism will not only be brought to its knees, it will become like Samson. It will be finally subjugated and brought down to the prisonhouse.

Lesson learned
Jehoshaphat eventually did learn his lesson and broke off all semblance of union with the northern kingdom. After the first set of ships were broken, Jehoshaphat had more ships built, 1 Kings 22:49. Ahaziah, son of Ahab and king of the northern kingdom, upon hearing of this new venture, wanted to send his servants along with those of Jehoshaphat. Ahaziah wanted to continue the alliance.

This time Jehoshaphat said NO! He had learned his lesson. There is no prosperity in political alliances, when compromise is the order of the day. Jehoshaphat ended his days having learned a valuable lesson. May Unionism do the same before it is too late!
Posted by Rev Brian McClung at Tuesday, March 07, 2017