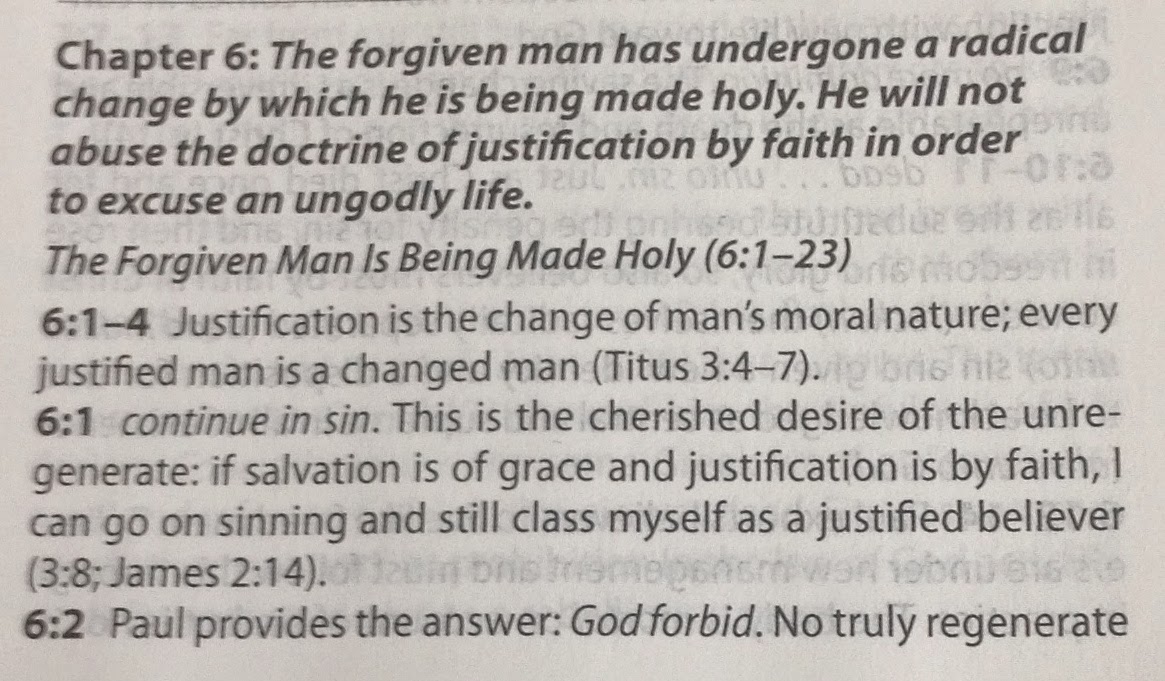 Either way it surely needs, and deserves, an immediate, public clarification and correction!

There are a number of Christians, including young believers, who have purchased hard printed copies of this Study Bible, who will be unaware of the erroneous nature of this statement. They will accept the content of this footnote as being accurate, believing it to be indeed the truth about the great doctrine of Justification. After all, it is contained in this Study Bible and no clarification or correction has been publicised, even though the publishers know about the error.


Error
The footnote is found on page 1,623, in connection with Romans 6:1-4. The footnote [pictured above], as it presently exists, reads: Justification is the change of man's moral nature; every justified man is a changed man (Titus 3:4-7).

This statement is doctrinally incorrect. It confuses Justification with Sanctification. Amazingly, not only is it incorrect, it has actually been turned into a statement containing grievous false teaching. In fact, it is Romish teaching to say that justification brings about a change of man's moral character. This very issue, of whether Justification brought about a change in man's moral nature, was a point of contention for the Reformers and Puritans, when opposing the errors of Romanism.

Justification has to do with the acquittal from guilt of those who stand accused of sin. It is a legal, forensic term. The Justification of a sinner is a legal change of position, a legal vindication, before God, the Judge of all men, and not in any way the change of any man's moral nature.

Serious Implications
Not only is this statement wrong on the matter of Justification, as it applies to a sinner, but it also has serious reprecussions for the person of Jesus Christ. The New Testament teaches that our Saviour was in a particular way 'justified', cf. Luke 7:29: And all the people that heard him, and the publicans, justified God, being baptized with the baptism of John; 1 Timothy 3:16: And without controversy great is the mystery of godliness: God was manifest in the flesh, justified in the Spirit, seen of angels, preached unto the Gentiles, believed on in the world, received up into glory.

If the doctrine of Justification means a change in a person's moral nature then this must mean that a change also took place in God/Christ's moral nature. The first possibility, with respect to a sinner, also requires the second possibility, with respect to Christ! This simply cannot be so! God is perfect in His moral nature and can know no change to that nature, cf. Malachi 3:6: For I am the LORD, I change not; therefore ye sons of Jacob are not consumed.

The simple insertion of the word 'not' would leave us with a very strange sentence construction and could well become a statement of the obvious. It's hard to know just where the word 'not' is to be inserted for the sentence to make any sense and have any relevance.

In the light of this most serious mistake/error/false teaching, should not the publishers immediately and publicly draw people's attention to this, at best, unfortunate inclusion? This is not a typographical error that has no unintended consequence. As the sentence stands, in the footnote, it is presently teaching the Roman Catholic view of Justification. This then is a most serious and deeply unfortunate doctrinal error to be found in the Reformation Heritage KJV Study Bible!


Editing
You are left to wonder how a statement like this, with its theological and doctrinal implications, ever got through the editing process! It will be interesting to discover how extensive the correction will be to this footnote in future editions. It is absolutely astonishing that a supposed 'typographical error' has been turned into a statement of Romish doctrine! What would the 'probability' of this ever happening be?

I also wonder, is the reluctance to highlight this serious error, down to an unwillingness to impact sales of the hard copies already printed of this Study Bible? Would existing copies need to be pulped? Would people be entitled to a refund?

Surely for the publishers to knowingly let serious error, of this nature, continue to be circulated in this Reformation Heritage KJV Study Bible without any immediate, public clarification or correction is not honourable conduct!!!
Posted by Rev Brian McClung at Friday, March 27, 2015

It would be interesting to know who was individually responsible for the notes on the various NT books, especially
'Matthew' and 'Romans', for such authors should be no secret. I realise that Joel Beeke is the General Editor, but I understand Gerald Bilkes is the New Testament editor. It would be good if there was some clarification from those individuals responsible for Matthew 16: 18 and Romans, but maybe Gerald Bilkes, as the NT editor, has the responsibility to inform us how theses notes will be amended/corrected in future editions.

Thank you for that information about the announcement that Joel Beeke has made about proposed changes to the Study Bible.

I don't upload comments with links so your comment won't appear but thanks again.

Dr. Beeke just posted in his blog about it.
He said:
"We also wish to thank those of you who read through the Study Bible already and sent in any typographical errors you found. (...) Only two of them impinge on doctrinal issues and are worthy of mention here. First, the note for Romans 6:1–4 should read, “Justification is not the change of man’s moral nature, but every justified man is a changed man (Titus 3:4–7).” An editor in the outside firm that did the final proofing for grammar, spelling, and punctuation mistakenly deleted the word not! She has written to us wishing to express her “deepest apologies for any confusion that this error has caused.” Happily, in the introduction to Romans as well as in several other places in the notes to Romans and throughout the Bible, we made abundantly clear that we strongly affirm justification by faith alone. Second, we regret that the wording in the note on Matthew 16:18 was not as clear as it should have been. Hence we have changed this to read as follows: “Peter means ‘a stone’; rock is a different word referring to bedrock (7:24–25). Christ, reflecting on Peter’s name, affirmed that the confession of Him by Peter and the other apostles is the bedrock on which He builds His church (Eph. 2:20; Rev. 21:14). Nothing here implies that Peter is the first in any apostolic or papal succession. True apostolic succession lies in the confession of the gospel through the ages.” We appreciate your alerting us to these things."