#5. Insurgence - To counter the Protestant Reformation Rome turned to the use of political and military force. Where natives in new lands in South America or people in European nations needed "convincing" to become Catholic or to return to Catholicism, Catholic rulers such as Phillip II of Spain and later the Holy Roman Emperor, Ferdinand II, used political and even military coercion, either to enforce Catholicism on all in a given area or to force those who wanted to remain Protestant to leave altogether.

There were the religious wars in Europe, including what was known as The Thirty Years war. There were numerous Catholic Conspiracies against Protestant nations including England and particularly Queen Elizabeth I, 1558–1580.

Across Europe from 1560-1715 there was the Age of Religious Wars. It is reckoned that between 1560 and 1715, Europe witnessed only thirty years of any semblance of peace. Romanism was being threatened on every hand, not only by the doctrines of Lutheranism but also by those of Calvinism. Biblical truth was spreading even into Catholic nations and Rome was not happy. Her answer was to wage war to the death upon Protestants, in Germany, Bohemia, France, Netherlands, England and Scotland. 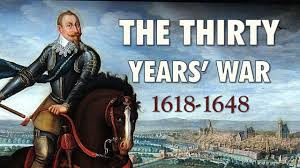 The Thirty Years' War was waged through Central Europe from 1618-1648. In 1555, the Peace of Augsburg brought about the division of the German states into Catholic and Protestant dominions, with each Elector/Prince having the right to determine which religion was practiced by their subjects.

However, Protestantism recognised no political boundaries and spread into the Catholic states. By the start of the 1600s the Holy Roman Empire was divided along two hostile lines. There were the Protestant states/nations and the Catholic league of nations. This was a receipt for war. 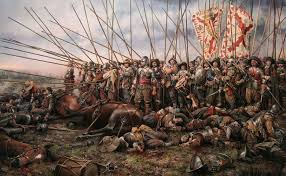 The Thirty Years' War actually began in Bohemia, which is part of the Czech Republic, or Czechia, as it is now known. When Ferdinand II became the king of Bohemia in 1617, the Bohemian Protestants feared he would turn Bohemia back to Catholicism as Ferdinand was viewed as a zealous Catholic.

A time of persecution of Protestants followed, ending with the battle of the White Mountain in November 1620. Protestantism in the Czech lands had suffered a serious blow. With Protestantism seemingly defeated Ferdinand used the Jesuits to turn Bohemia back to Catholicism.

While the battle between Protestantism and Romanism was lost in the Czech lands it continued through the north states and nations of Europe. The German states and Denmark became more involved.

By 1630 France entered the war, aiming to crush the Austrian and Spanish Hapsburgs dynasties, she declared war on Spain and formed an alliance with Sweden and Germany. The war lasted for another thirteen years until 1643 when at a battle fought in the Netherlands the Spanish Hapsburgs were finally defeated by France and her allies.

Peace negotiations continued between 1644 and 1648. Eventually, the Treaty of Westphalia, was signed in October 1648. As a result the Holy Roman Empire became divided into more than three hundred sovereign states. In these states Lutheranism, Calvinism and Catholicism were recognised.


France & The St Bartholomew’s Day Massacre
Calvin was French and was converted to Christ sometime around 1528-33. The Protestant doctrines were taking root in France by the 1530s and those who believed them faced persecution from King Francis I and the Roman Church. By 1545 thousands had been killed or sent to the galleys. Francis was succeeded by his son Henry II who carried on his father’s policy with even more ardour and zeal. A special committee of the French Parliament was formed called La Chamber Ardente or The Burning Chamber. 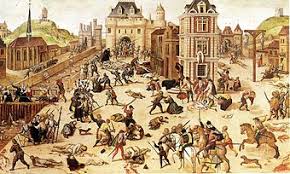 From about 1560 the French Protestants were called Huguenots and leaned more towards the Geneva doctrines than they did towards Lutheranism. From this time persecution intensified. A Huguenot appeal for religious freedom was ignored and in 1562 conflict broke out. An attempt at conciliation was made in 1572, with the proposed marriage of the Huguenot, Henry of Navarre to Margaret of Valois, a Catholic member of the royal family.

This was a trap to ensnare Protestants. Before the festivities were over there occurred one of the most hideous crimes recorded in history. The date was 24th August 1572. On the evening of the wedding celebrations the king’s mother, Catherine de Medici, an ardent Catholic, went to her son and told him of a supposed plot to assassinate the royal family and the Catholic leaders on the part of the Huguenots. She urged the slaughter of all the Protestant wedding guests. Over the next days, and months, thousands were put to death on the streets of Paris and beyond including the provinces of Rouen, Lyon, Bourges, Orleans, and Bordeaux. 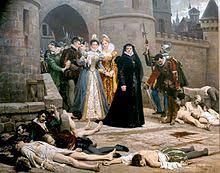 It has been estimated that 70,000 Protestants were killed in what became known as the St Bartholomew’s Day Massacre. The joy of Romanism at such slaughter is to be observed by the Catholic Mass said by the Pope as he celebrated a Catholic victory over Protestantism.

A mass exodus of Huguenots, estimated in the region of 300,000, took place. Among them were the most skilled of French craftsmen. It has been said that Louis XIV paid a very heavy price for adherence to Catholicism. He ruined his country in the name of Romanism.
Posted by Rev Brian McClung at Monday, January 08, 2018